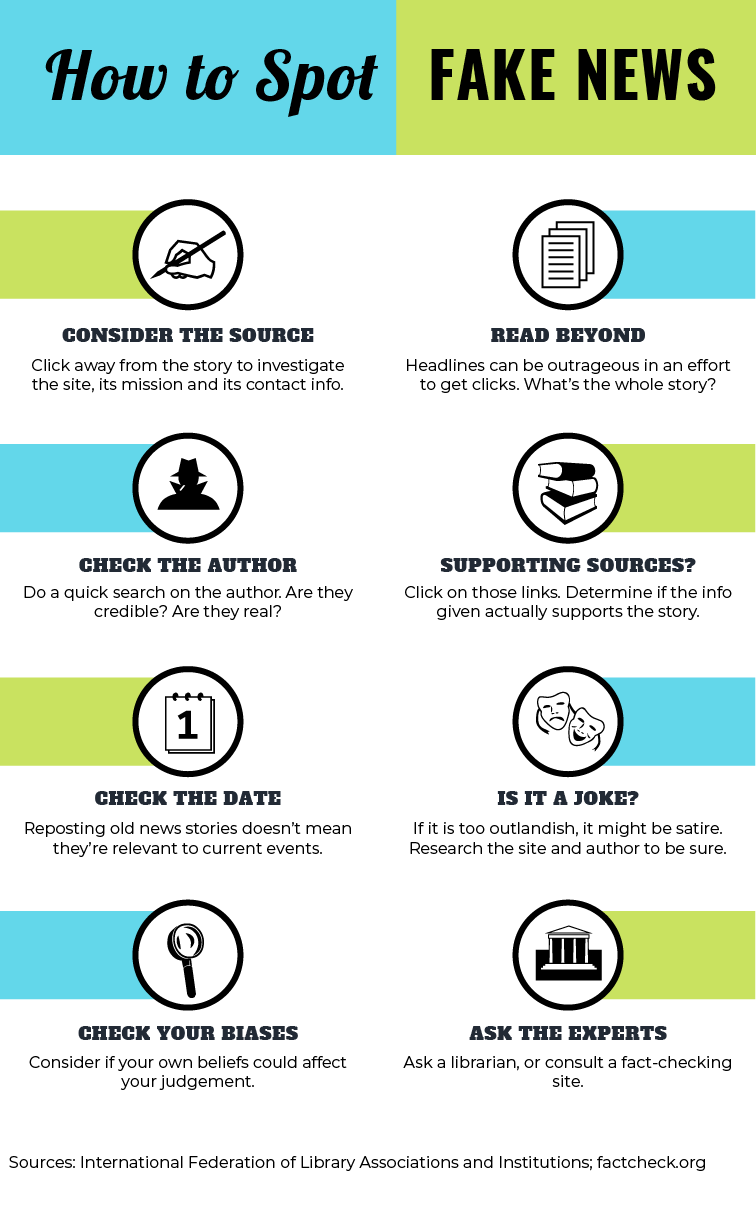 View an accessible version of the Fake News infographic.

Background reading on the state of disinformation in the United States. Many of these appeared around the time of the 2016 election, and we've included other more recent reports as well.

Fake news and the spread of misinformation
From the Shorenstein Center at the Harvard Kennedy School, links to peer-reviewed articles.

NiemanReports: Election '16: Lessons for Journalism
From the Nieman Foundation at Harvard; several articles on fake news and news literacy

The Science of Fake News
Science, March 9 2018 ($)
Multi-author article on the science behind why disinformation campaigns are effective. Unfortunately, this is behind a paywall; the link will work for Harvard affiliates.

Network Propaganda: Manipulation, Disinformation, and Radicalization in American Politics (2018, Oxford University Press)
A book from the Berkman Klein Center on media coverage of the 2016 US Presidential election; the online version is free of charge.

The Global Disinformation Order: 2019 Global Inventory of Organized Social Media Manipulation
University of Oxford report on the use of disinformation campaigns by national governments.

A Guide to Anti-Misinformation Efforts Around the World
2018 report on steps countries around the world are taking to combat disinformation campaigns.

Disinformation and the 2020 Election
One in a series of report from NYU's Stern Center on Business and Human Rights, on the role of social media in the 2020 election.

Many organizations around the world study disinformation in the current media landscape. To keep up on the most current work in this rapidly-evolving area, consider following the work of these organizations:

These sites attempt to impartially rate the veracity of news items and statements by public figures:

Consider installing a browser extension to gauge the content of news sites:

Image manipulation is frequently used in disinformation campaigns and manipulated video is beginning to be used more widely. There are tools that can help identify the source of an image, and whether or not images or videos have been altered.

Many of the tools listed above were found at one of these two sites, which comprehensively list tools for verification, as well as other helpful links in the fight against disinformation.