This guide describes the organization of federal administrative law materials - and how to find them.

Administrative agencies draw authority from both Congress and the Executive. Agencies are typically created by Congress through the enactment of "enabling" statutes. Each agency is as unique in structure as its enabling statute. An agency may:

For a more in-depth discussion on administrative law, explore the following:

Agency websites are a good place to begin your administrative law research. When navigating an agency website, look for headings such as:

To find an agency, Google the agency's name or search USA/Directory.  To find defunct agency website materials, including helpful reports, use the Cyber Cemetery.

Intro to the APA

The Administrative Procedure Act, Pub. L. 79-404 (1946) requires that agencies follow certain steps when putting rules into effect.  Under the APA, agencies must:

Around the time when the APA was passed, the Attorney General released a manual:

To learn more about the Act visit:

There are many compiled legislative histories for the Administrative Procedure Act:

This chart depicts the process of rulemaking step-by-step: 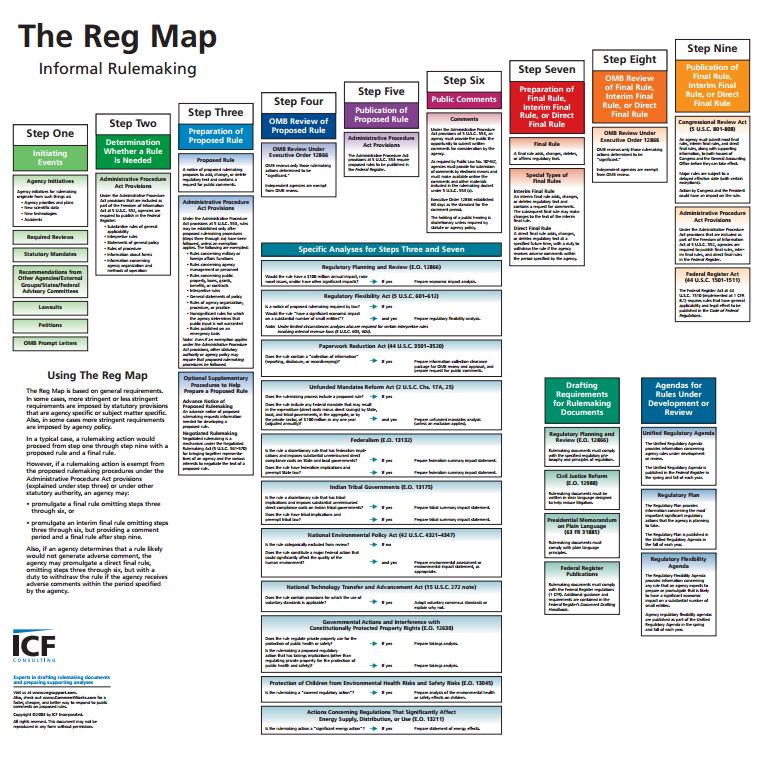 The federal register is accessible through a number of sources including:

Citations to the Federal Register will contain "Fed. Reg."

General and permanent rules and regulations are published in the Code of Federal Regulations (CFR), which is organized into 50 topical titles (typically named for the issuing agency). Chapters are further subdivided into parts and subparts. Parts are organized in sections.  The first edition of the CFR was published in 1939 containing regulations in force on June 1, 1938.  An Index to the Code of Federal Regulations is available from the National Archive.

A Source Note at the beginning of each CFR part provides the Federal Register citation and date where the part was published. If a particular section was added or amended later, a separate source note will follow that section.  The CFR is updated by amendments and new rules and regulations in the Federal Register.

The full CFR is printed once a year, with updates occurring one-quarter of the set at a time.

The CFR is accessible through a number of sources including:

The CFR is published once a year; thus, any language in the latest published CFR must be checked for currency.  To establish the current validity of an existing regulation, find and read case law (in your jurisdiction) that cites your regulation.  Look out for court constitutionality rulings and other holdings affecting the rule's "good law" status.  Often the fastest and easiest way to update regulations is to use a citator (like Shepard's or Key Cite).  However, you can also update your research using the following free online sources:

Federalregister.gov offers a useful tool for checking updates, or proposed changes, to current CFR sections.  Under the Search Tab, select "Advanced Document Search."  Scroll down until you see the field "Affecting CFR Part," and enter the relevant section. 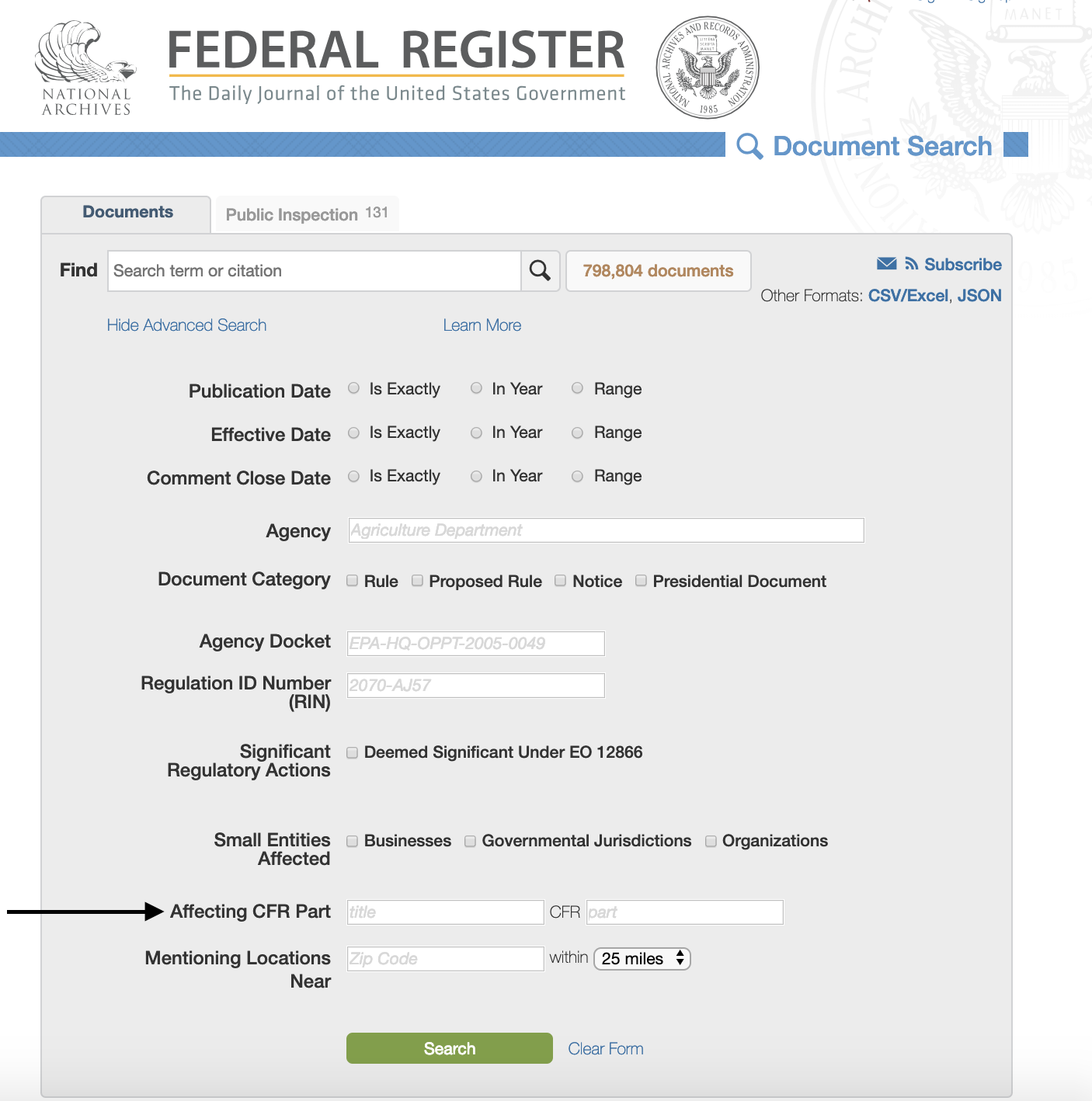 When searching for regulatory history information check out the Library of Congress' guide to help you get started:

The Federal Register contains most of the important summary, explanatory and documentary information on a rule.  For regulatory docket materials and public comments visit Regulations.gov.

Administrative agencies act in a judicial-like capacity when issuing decisions that interpret and enforce regulations.  These decisions are rarely gathered in one place, and some agencies do not publish decisions in any format. Administrative agency websites are a great place to start. The University of Virginia Law Library publishes a guide which provides links to agency opinions and publications:

Agency decisions & guidance can be accessed through the following sources:

Some agencies publish official reports of their decisions in print reporters or binders called loose-leaf services. For older administrative decisions, print publications may be the only source. The Bluebook lists:

For print materials at Harvard, search Hollis, the library catalog.

Under the Freedom of Information Act (FOIA), you may request documents from administrative agencies.

Executive materials are found in Title 3 of the CFR.  Presidential Documents are found in the back of each day’s Federal Register.  In addition, the White House website offers a great amount of information and access to Executive documents.  The Office of the Federal Register published a Guide to the Rulemaking Process, which can help you to identify useful information about the types of documents generated as part of the rulemaking process.

Public Papers of the Presidents

Secondary sources such as books, current awareness/news sources, scholarly articles, or advocacy communications are extremely helpful in getting started.

Ask Us! Submit a question or search our knowledge base.

Chat with us! Chat  with a librarian (HLS only)

Meet with Us  Schedule an online consult with a Librarian

This guide is licensed under a Creative Commons Attribution-Noncommercial-Share Alike 3.0 United States License.

You may reproduce any part of it for noncommercial purposes as long as credit is included and it is shared in the same manner.