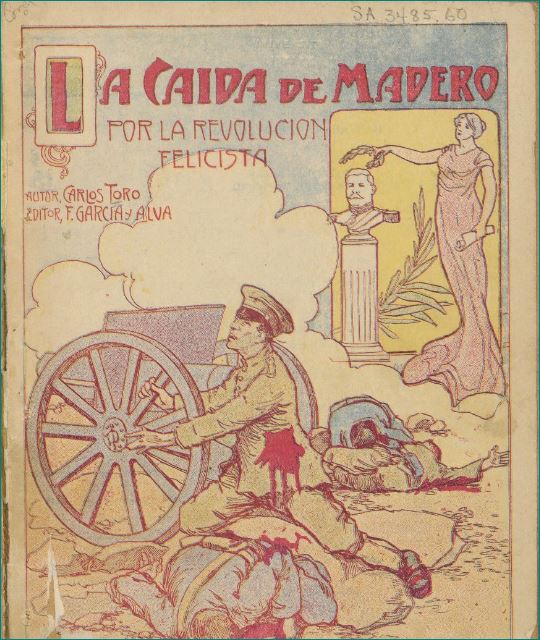 Pamphlet from the Mexican Revolution, 1913

Digital Library of the Caribbean
dLOC provides access to digitized versions of Caribbean cultural, historical and research materials. These include books, journals, and newspapers in full text, photographs, posters, maps, and other primary resources. TIP: For best results, browse by country.

Latin American Pamphlet Digital Collection
The collection includes more than 5000 items dating from the early 19th until the early 20th century. Many include maps, photographs and other illustrations. You can search the database by keyword, author, subject, etc. (See an example at the left.)

Independent and Revolutionary Mexican Newspapers
Comprising over 1,000 titles from Mexico’s pre-independence, independence and revolutionary periods (1807-1929), the newspapers in this collection provide rare documentation of the dramatic events of this era.

Nexis Uni and Factiva
These are databases of newspapers and other news sources around the world, from 1980 to the present. In Nexis Uni, use the Advanced Search; select the News tab; and type your search terms in Headline. In Factiva, the default date range is "Last 3 months," but you can change the date coverage if you need to. You don't need quotation marks for phrases. To find your search term in headlines, use the code hd (e.g., hd=peronistas).

ARTstor
Works of art and journalistic photography from around the world -- such as Peruvian folk art depicting peasants being apprehended by paramilitary troops.

For sources on revolutionary murals, see the search results for Mexican Mural Painting and limit to "Show only: Online." For murals in other countries, use the HOLLIS Advanced Search and search for the Subject "mural painting and decoration", adding the name of the country as a keyword.

AP Images
News photographs from the Associated Press, spanning the 20th century. After searching, you can limit the Source Type to images only.

Foreign Law Guide
On the page for each country, click on "Codes" for links to the country's legislative website, where texts of core legislation are often available.