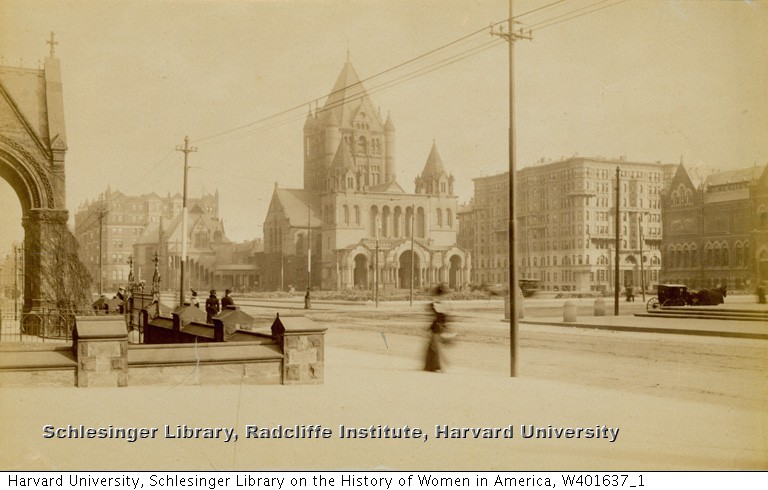 This guide is a list of the library's manuscript and audiovisual collections processed and cataloged since 2008 as part of the Maximum Access project. (The nearly 12,500 books cataloged as part of the project are available through HOLLIS.)

The Schlesinger Library at the Radcliffe Institute for Advanced Study (RIAS), Harvard University, announces the completion of a five-year project to address its backlog of uncataloged print, manuscript, and audiovisual material.  Part of the Library’s five-year strategic plan set forth in January 2007, this initiative was funded by RIAS and resulted in the cataloging of the entire print backlog (12,497 titles in addition to 17,675 volumes currently received), in the processing of 207 manuscript collections (6412.49 linear ft., or 80% of the manuscript backlog), and in the processing of 8479 unpublished audiovisual items (or 60% of the audiovisual backlog).

Unexpected discoveries include a videotape of the last concert of the Chicago Women’s Liberation Rock Band in the early 1970s; a 1778 manumission of a female slave named Elizabeth; and spirit writings in chalk dating from spiritualist meetings in the early 20th century.

Among the collections now available to research are the records of a number of national organizations: Lamaze, National Abortion Rights Action League, Legal Momentum, and Concerned United Birthparents, as well those with a more local focus:  Fishermen’s Wives of Gloucester (Mass.) Association, Harvard Union of Clerical and Technical Workers, Mautner Project for Lesbians with Cancer, and Silent Spring Institute.  Other manuscript collections document the lives of transgender individuals (International Foundation for Gender Education, Mark Ethan Smith, and J. Ari Kane-Demaios) as well as women who were active in the Republican Party (Anna Chennault, Mary Dent Crisp, and Mildred Jefferson).    Also included in the project are the papers of National Organization for Women activists Toni Carabillo, Judith Meuli, and Patricia Ireland; lawyers Florynce Kennedy and Catharine MacKinnon; singer Holly Near; writers Barbara Ehrenreich and Ellen Willis; advocate for the poor Kip Tiernan; and sex educator Shere Hite.

Newly described audiovisual collections include those of writers June Jordan and Eve Merriam; Julia Child; feminists Alix Dobkin and Andrea Dworkin; outtakes from The Life and Times of Rosie the Riveter; and recordings from the National Women’s Political Caucus, the Boston Women’s Health Book Collective, and Boston Women’s Community Radio.