Start your archival research for National History Day 2015 - 2016 and explore topics related to the theme of Exploration, Encounter, and Exchange with this guide.

Use the menu on the left to view additional material related to this topic. You can also explore other materials and topics using our library subject guides.

Many of our physical collections are stored offsite and/or have access restrictions. Be sure to contact us in advance if you plan to visit.

In keeping with the theme of Exploration, Encounter, and Exchange, these collections consist of diaries, memoirs, and correspondence related to travel experiences. Often (but not always) exploratory in nature, travel naturally facilitates encounters among people, things, and ideas, resulting in physical, cultural, and ideological exchange.

Cornelia James Cannon (1876-1969) was a best-selling author and civic leader, and was active with the Planned Parenthood League of Massachusetts, the Cambridge Civic Association, and the League of Women  Voters. Collection includes travel scrapbooks and writings.

For additional materials from this collection, please see the Cornelia James Cannon collection finding aid. Materials accessible online will be indicated in blue.

For additional materials from this collection, please see the Grace Gallatin Seton-Thompson collection finding aid. Materials accessible online will be indicated in blue. 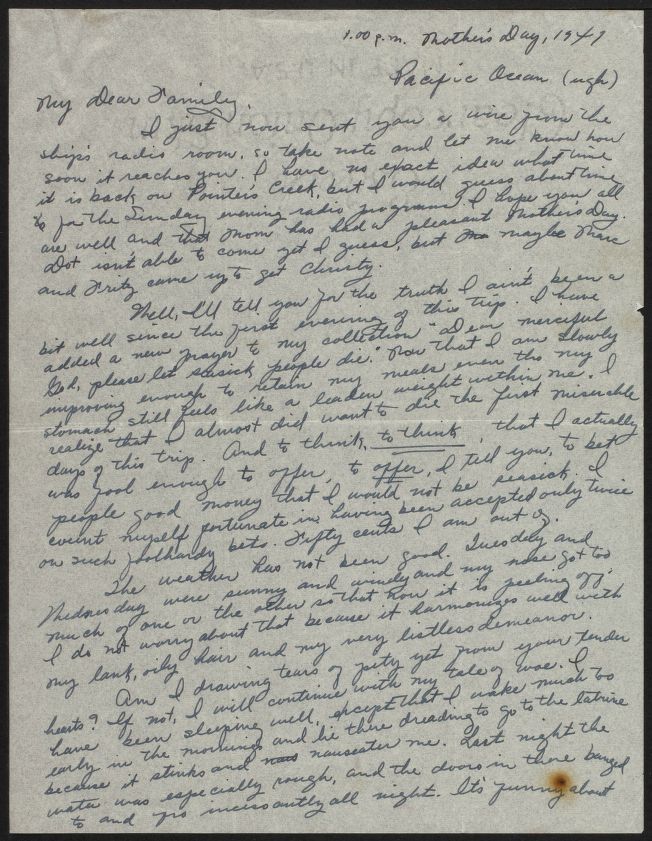 Freda Mae (Rustemeyer) De Pillis worked in Japan with the occupation forces of the U.S. Army, as a clerk in the Adjutant General's office, 1947-49. Her collection includes letters and transcriptions of journals written while serving there. 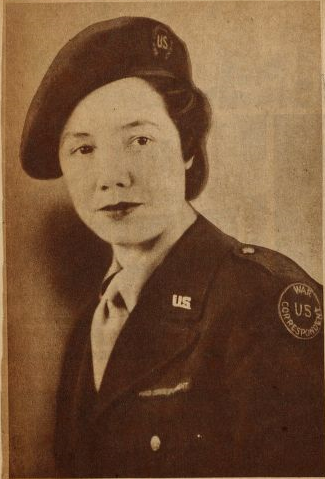 Catherine Mary Coyne (1907-1992) was born in Portland, Maine, and graduated from Boston University, where she was the first woman appointed to a senior staff position at the Boston University News. She was a reporter for the Boston Herald in Europe from May 1944 to July 1945 and was one of the few American women permitted to accompany troops as they landed in Normandy and fought their way into Germany. Her diaries and travel journals, including one detailing her travels in France, Germany, and Italy, August 1945-July 1947, have been digitized 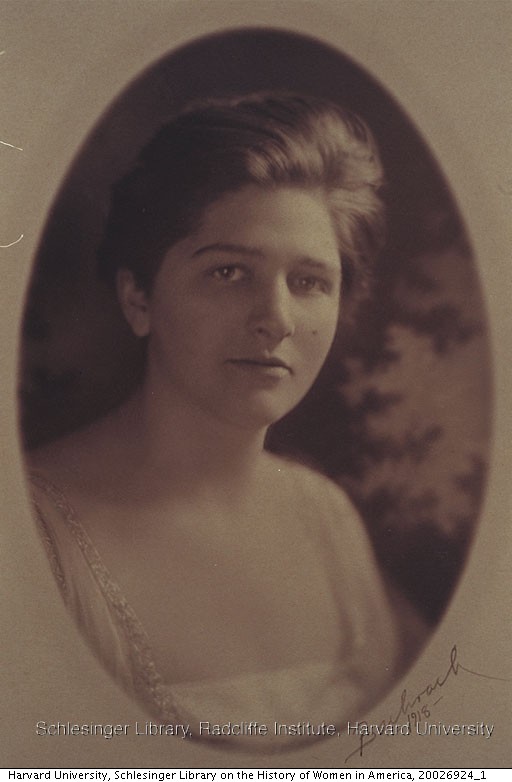 Fundraiser, philanthropist, and author of Careers for Women (1920), Catherine Filene Shouse was a woman of many firsts: the first woman to receive a master's degree in education from Harvard University (1923); the first woman appointed to the Democratic National Committee (1925); and the first woman to chair the board of the Federal Prison for Women (1926), where she instituted job training and rehabilitation programs. In 1929 she founded the Institute of Women's Professional Relations, which organized national conferences on opportunities for women with more than a high school education. Shouse was an ardent supporter of the perfoming arts, and  in 1966, Shouse donated 100 acres and funds for an open-air theater to the National Park Service, and Wolf Trap came into being as the only national park for the performing arts.  Digitized materials include travel diaries, correspondence, and clippings.

For additional materials from this collection, please see the Catherine Filene Shouse collection finding aid. Materials accessible online will be indicated in blue. 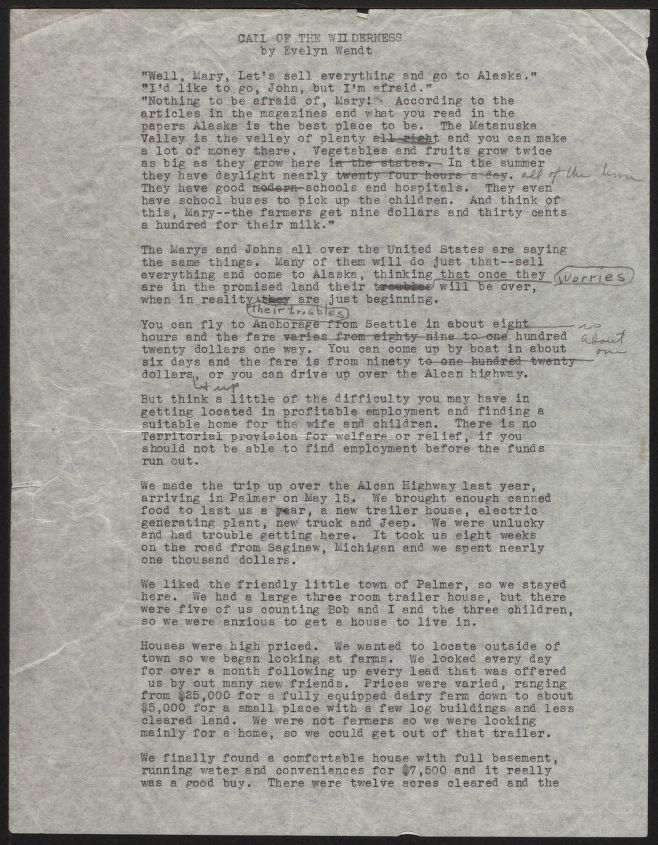 In March 1947 Evelyn Wendt, her husband, and three children drove to Palmer, Alaska, along the Alcan Highway, a journey that took two months, to become a part of the Matanuska Valley Colony, an agricultural colony sponsored by the Federal Emergency Relief Administration to promote settlement and to investigate sustainable crops in the region. Call of the Wilderness, a typed account of Wendt's trip to Alaska, includes lists of provisions and gear, and a letter about possibly publishing a series of articles 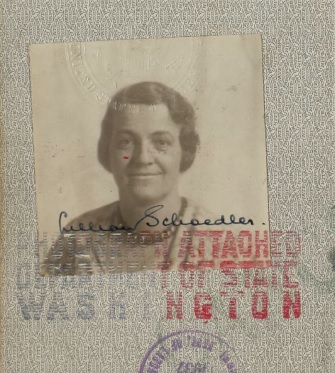 Executive secretary and world traveler, Lillian Schoedler traveled on every continent except Antarctica. Digitized materials include her letters to family and friends (most written while traveling), diaries, travel notes and reports, articles, account books and other materials. The travel materials are extensive, rich in description of scenery, people, and travel conditions, but lacking in political observation.

For additional materials from this collection, please see the Lillian Schoedler collection's finding aid. Materials accessible online will be indicated in blue. 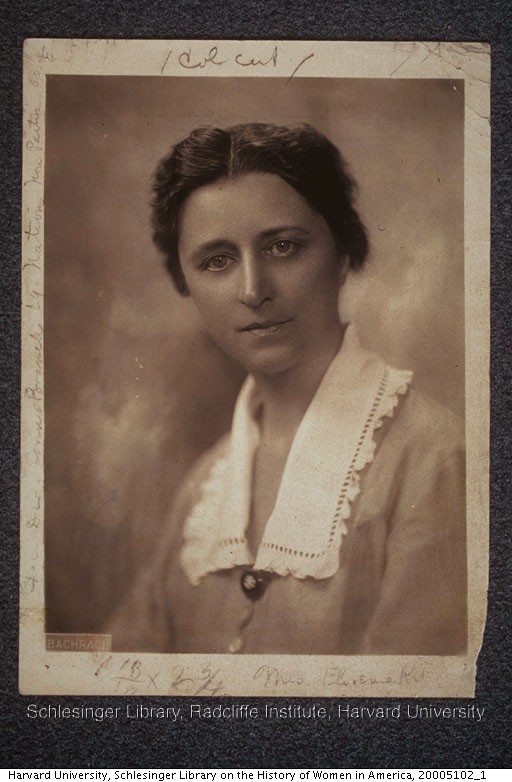 For additional materials from this collection, please see the Florence Kitchelt collection finding aid. Materials accessible online will be indicated in blue.

The Nichols-Shurtleff family was a well-to-do Boston family whose female members were active in social and civic affairs, women's suffrage, and art. The travel diaries of Margaret Shurtleff's mother-in-law, Sarah Ann Keegan Shurtleff, record her thoughts about people and places she encountered abroad, and have been fully digitized.

For additional materials from this collection, please see the Nichols-Shurtleff Family Papers finding aid.  Materials accessible online will be indicated in blue.

Elizabeth Cary Agassiz administered the Agassiz School for Girls from 1855 to 1859 and in 1879 was one of the managers for Private Collegiate Instruction for Women (Harvard Annex). She later became president of the Society for the Collegiate Instruction of Women in 1882 and the first president of Radcliffe College from 1894 to 1903. Digitized materials from her papers include correspondence from her travels in Europe and South America.

For additional materials from this collection, please see the Elizabeth Cary Agassiz collection finding aid.  Materials accessible online will be indicated in blue. 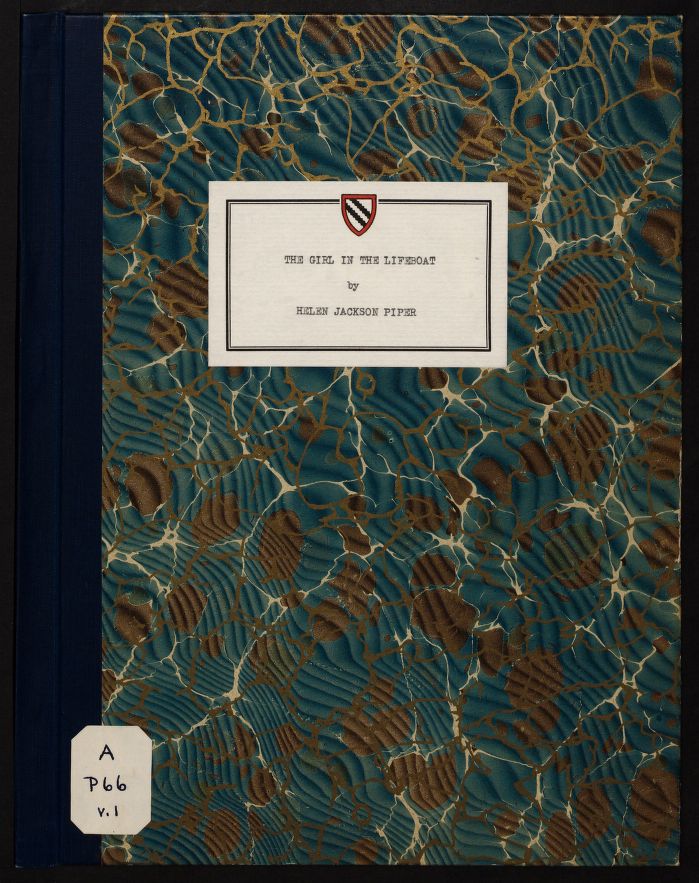 Code was a Red Cross volunteer in Boston during World War I. After the death of her son, she went to India seeking intellectual and spiritual satisfaction. Correspondence and journal of Code describe her journey from New York to India via England. Includes a travel log, observations on social life and customs, and descriptions of traveling companions and her participation in social projects. The papers document Code's initial enthusiasm and eventual disillusionment with Indian philosophy and customs. 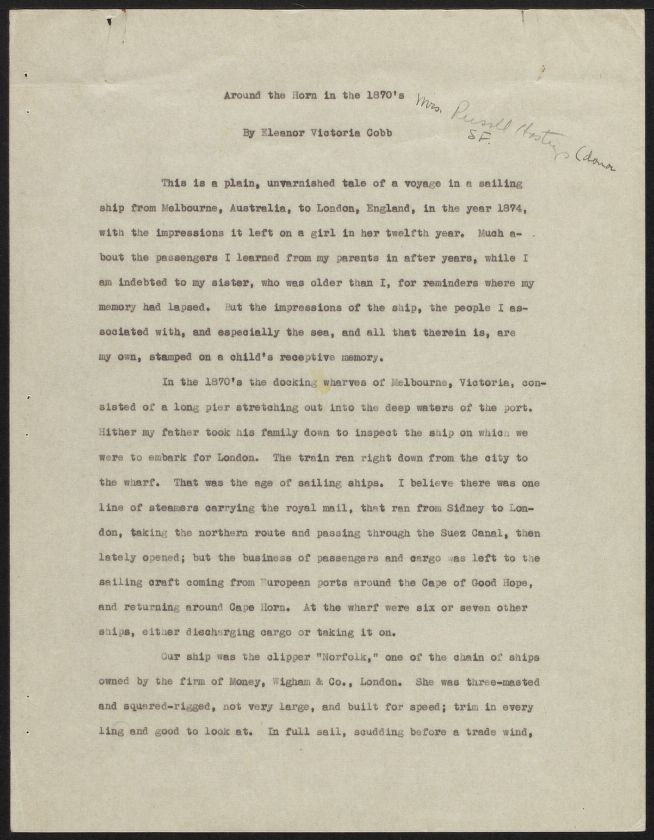 Eleanor Victoria Cobb sailed from Melbourne, Australia, to London, England in 1874 on the clipper Norfolk. Her account of her voyage is entitled "Around the Horn in the 1870's."

Corinna Lindon Smith was an author, activist, and lecturer on Egyptian archaeology, Islam, and literature. She and her husband spent much of their lives abroad, particularly in Egypt. During World War I, the Smiths worked with the Comité Franco-Américain pour la Protection des Enfants de la Frontière (Franco-American Committee for the Protection of the Children of the Frontier), which provided assistance to impoverished French children and their families. Returning to the U.S., she joined the Executive Committee of the Eastern Association (later known as the Association on American Indian Affairs) in 1924; two years later, the General Federation of Women's Clubs appointed her its national chair of Indian Welfare. She spent her last fifteen years working for diverse causes, including Native American rights, public health programs, narcotics control, and the rehabilitation of former female prisoners. Digitized collection materials include travel writings from Egypt, the Middle East, and southeast Asia. 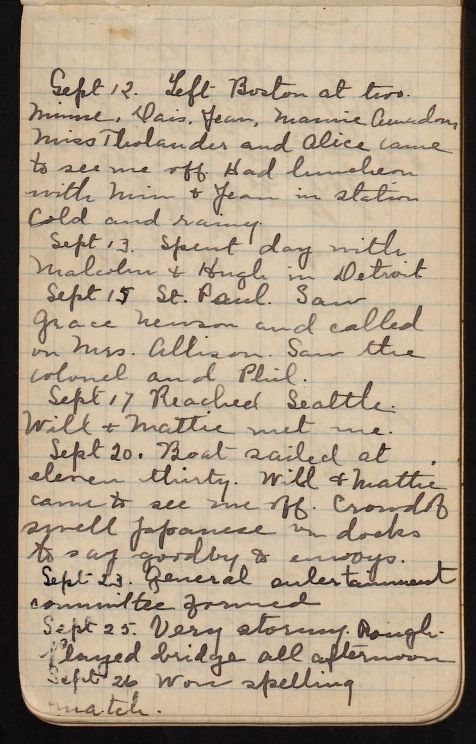 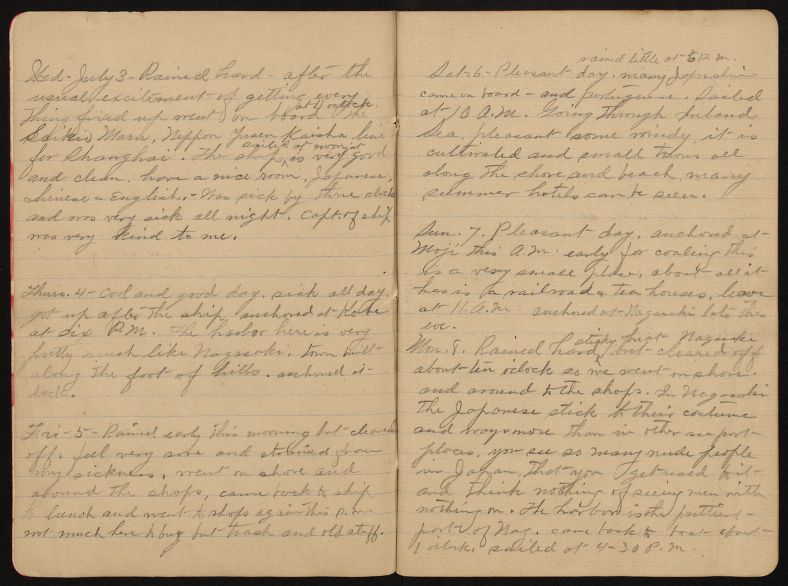 Jessie Anglum probably grew up on a farm near Belmont, N.Y. She married Daniel F. Anglum, a captain in the U.S. Army. She traveled in the Far East and her husband was stationed for a time in the Philippines. The collection consists of one volume detailing Anglum's travels in Japan, China, and the Philippines.

Amelia Mary Earhart, who disappeared during a flight around the world, was the first woman to fly, and to fly solo, across the Atlantic Ocean, in 1928 and 1932 respectively. Digitized material includes correspondence. 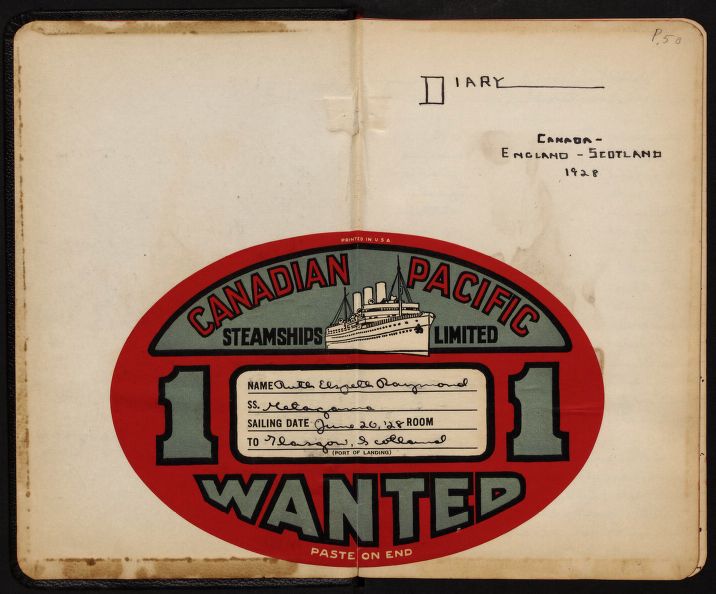 Writer and librarian, Ruth Elspeth Raymond attended Mount Holyoke and Radcliffe and graduated from Harvard Extension in 1943. She wrote plays, short stories, and some longer works, and traveled in England, Scotland, and Canada. The collection consists of her travel diaries. 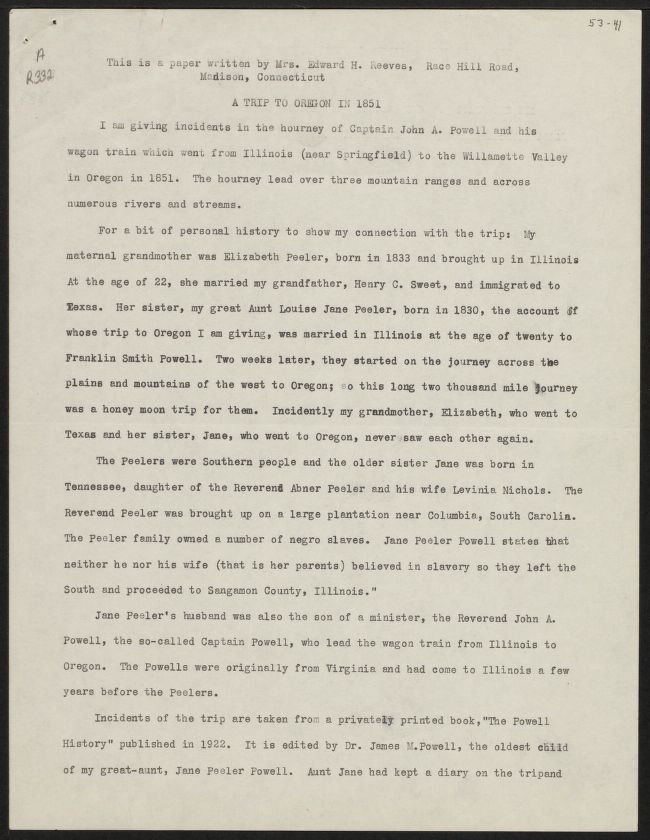 Mrs. Edward H. Reeves was the grandniece of Captain John A. and Jane Peeler Powell, who moved from Illinois to Oregon in 1851. Collection consists of a typescript account by Reeves describing the Powells' overland journey, including many quotations from Jane Powell's diary. 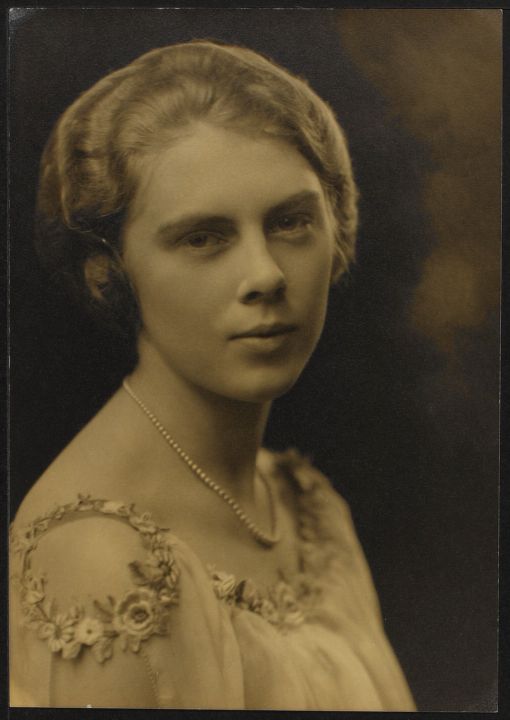 The daughter of Frank L. Morse, inventor and director of the Morse Chain Company in Ithaca, N.Y., Langer graduated Phi Beta Kappa from Cornell in chemistry and studied mathematics at the Sorbonne (1923-1924) in preparation for a degree in physics. She returned to the United States in 1924 and attended Johns Hopkins University. She was an active member of a number of Cambridge groups, including the Cambridge Art Association and the Saturday Morning Club. Collection includes letters to her parents, mostly from Paris, 1923-1927, 1945.

Botanist Alice (Rich) Northrop taught briefly in the New York City school system and later at Hunter College as a professor of botany. She traveled widely in the American and Canadian West and Northwest, and in Central America and the Caribbean, at a time when most of these areas were considered inaccessible to non-native women, and were still largely unexplored even by (non-native) men. Throughout her adult life she endeavored to make the joys of nature available to people confined to cities, and for this purpose she founded the School Nature League in 1917. Digitized material from her collection include two volumes used as a combination of diary, scrapbook, and field notebook, containing photographs, plant and insect specimens, sketches, and correspondence. 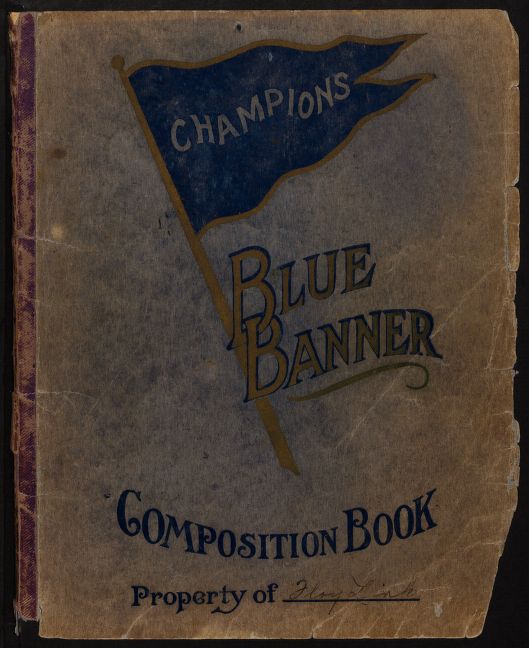 Rettie Downer Blanchard took a car trip from Vermont south to Florida and then west to California between October 10, 1932 and July 2, 1933. She was 65 years old when she made the trip. Her diary describes her travels, where she camped, car problems, roads, landscapes, people she met along the way, etc. She evidently spent part of the winter in Florida where she worked at various day jobs and also took a side trip to Cuba.