SOCIETY FOR THE PROMOTION OF THEOLOGICAL EDUCATION

Palfrey was a helpful alumnus of the Divinity School. When the Society for the Promotion of Theological Education (which was in charge of the school until 1831) issued an appeal for funds to build Divinity Hall, Palfrey preached two sermons on the subject and raised $ 2,000. In 1827 he became the Society's Secretary. In 1828 he became a Harvard Overseer and began teaching at the Divinity School part-time.

PROFESSOR OF BIBLICAL LITERATURE AND DEAN

"In the year 1831 ... I accepted a Professorship in the Theological Department of the University, and removed to Cambridge. ... My position had been every thing the heart could desire, and never more attractive, to say the least, when I relinquished it."
--A Letter to a Friend, 1850

When Andrews Norton announced his retirement in 1830, Palfrey was selected as his successor as Professor of Biblical Literature. In this capacity, he gave instruction in Old and New Testament as well as Hebrew and other Semitic languages. He was also given the new post as Dean of the Faculty; he was in charge of the building, called faculty meetings, and dealt with discipline problems. He drew up a new set of rules for the School (candidates for admission had to be college graduates or pass an entrance examination, all students should live in Divinity Hall, no students were allowed to preach before graduation), reorganized the curriculum (most lectures were to be held in the afternoon and there was to be no classes on Saturday), and dealt with the complaints of the other faculty members (Henry Ware, Sr., and Henry Ware, Jr.) over their salaries.

"I was for two years his pupil in the criticism of the New Testament. The contrast between him and his predecessor was very great. ... Dr. Palfrey ... with hardly less fixedness of opinion, admitted his own fallibility, invited discussion, welcomed the expression of non-agreement, and even asked his students to prepare in writing, and read to the class, their reasons for differing from him."
--Andrew P. Peabody, Harvard Reminiscenses, 1888.

"Dear father,
Our poor pig is dead at last, and weighed two hundred and twenty five pounds. We think this is pretty good for so young a pig, and I think it shows pretty clearly that we can keep a pig through the winter in our sty, since although we have had no very long spell of extreme weather, the pig was so fat. In the coldest weather, when I went out to the cow in the evenings sometimes, I would throw over to him some of the hay the cow had done with, so as to have it near the door of his house, and he would take up in his mouth and carry to his bed-chamber such of the hay that suited his habits of cleanliness. ... I miss the poor old fellow very much indeed, for when I was at work out in the barn with the back barn door open, he would waddle out to see me .... "
--Letter, John Carver Palfrey, age 15, to his Father, 1848 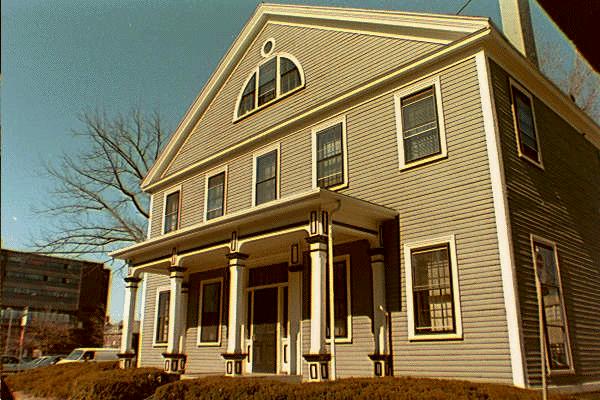 After a few months living in Divinity Hall with his students, Palfrey  bought twelve acres north of the college from Edward Everett, borrowed money from his father-in-law, and built Hazelwood as a family home. This house still stands, now on Hammond Street, and is now called Palfrey House. The streets in this area have Palfrey family names -- Hammond, Gorham, and Carver.

The family and two servants moved here in October 1831, shortly after the birth of son Francis (Frank). Hazelwood was the Palfrey home until 1916, when Harvard acquired the property.  In 2003, Harvard relocated and restored the home.