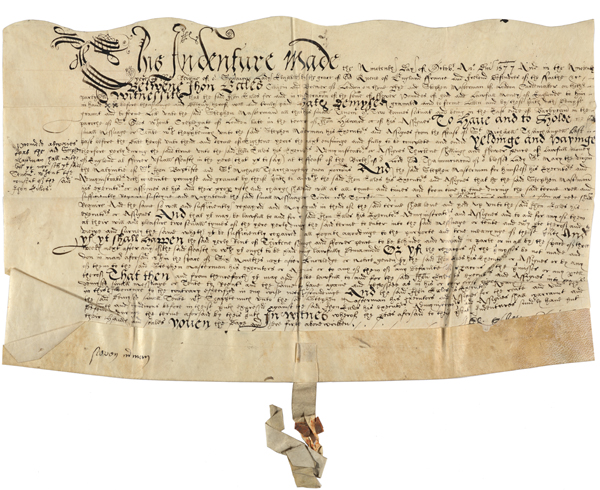 The earliest record in the Harvard University Archives is a 1577 deed in which the name John Harvard—presumably an ancestor of the namesake of Harvard College—appears as the former owner of a London tenement.

John Harvard (1607–1638), the University benefactor, had only a brief interaction with the College. He arrived in Massachusetts from England in 1637 and was stricken by illness less than a year later. He died on September 14, 1638, bequeathing all of his books and half of his estate to the new college.

John Harvard’s bequest was the first substantial gift to the College. When the Massachusetts General Court met in the following year, they honored his generosity by naming the institution “Harvard College.” 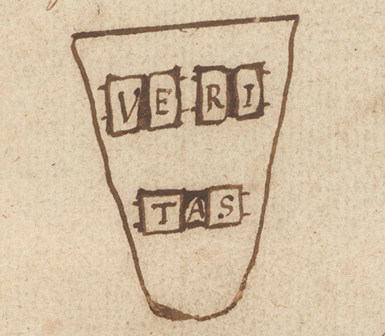 At a meeting on December 27, 1643, Harvard’s Board of Overseers decided that the College should have a seal in the form of a shield inscribed with the letters VERITAS, meaning truth. The letters “VE” and “RI” are placed over two open books, and the letters “TAS” are inscribed on the outside of the third, bottom volume. The books emblazoned on the shield reflect those found on the arms of European academic institutions including the Universities of Oxford and Cambridge, Trinity College, and the Collège de Sorbonne in Paris. The College arms were created as the central device of the College seal, a legal symbol of authentication to validate official documents created by Harvard.

The 1643 drawing, which is the earliest known representation of Harvard’s shield and Latin motto, appears in College Book 1, one of eight bound volumes, known as the College Books, which contain Harvard records from the 17th, 18th, and 19th centuries. 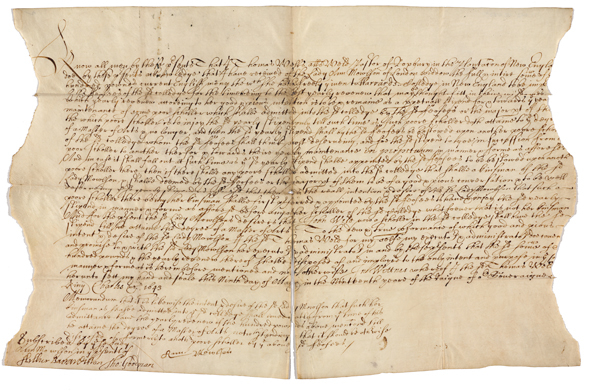 Lady Mowlson, née Ann Radcliffe, was born in 1576. She married alderman Thomas Mowlson, who later served as Lord Mayor of London. Upon her husband’s death in 1638, Lady Mowlson inherited half of his considerable estate.

In 1641, the Massachusetts General Court authorized three local ministers, Hugh Peter, Thomas Weld, and William Hibbens, to travel to England to raise money for the colony and for the nascent College. During that mission, Weld met with Lady Mowlson, who, on May 9, 1643, bequeathed £100 to be used for the “maintenance of some poor scholler.” Lady Mowlson’s bequest in 1643 funded Harvard’s first endowed scholarship. 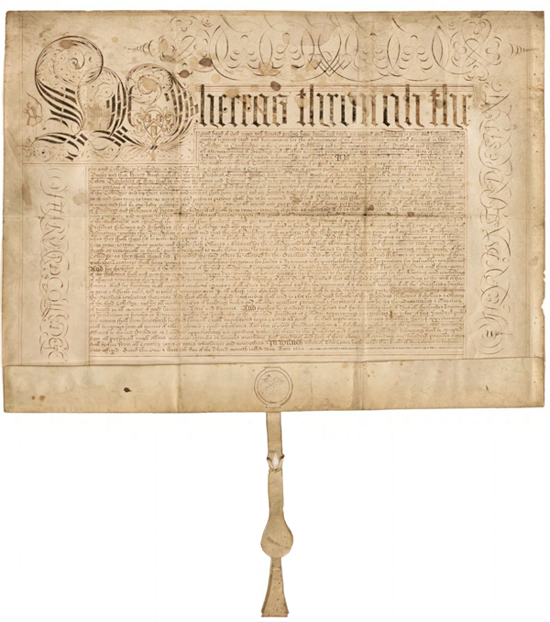 Signed by Governor Thomas Dudley in 1650, the Harvard Charter set forth the purposes of the growing College, and established the structure for its governance—the President and Fellows—which continues to this day. At each presidential inauguration since 1708, and possibly even earlier, the Charter has been presented to the incoming Harvard president as a symbol of office. Only on rare occasions is the great Harvard treasure made available for public display.

Whereas, through the good hand of God, many well devoted persons have been, and daily are moved, and stirred up, to give and bestow, sundry gifts, legacies, lands, and revenues for the advancement of all good literature, arts, and sciences in Harvard College, in Cambridge . . .

Examination of College Students and Others for Disorderly Conduct, 1676 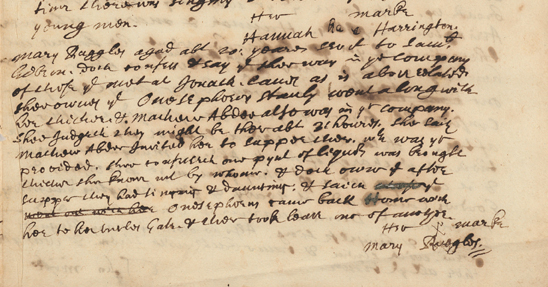 In 1676, Justice of the Peace and Harvard College Steward Thomas Danforth carried out a civil investigation into alcohol-related community disorders in Cambridge. In addition to providing transcripts of evidence given by three Harvard students, Danforth’s manuscript cites the testimony of one Mary Ruggles, a Cambridge resident:

Mary Ruggles aged about 20 yeares, servant to Samuel Gibson, doth confess and say that shee was in the company of those that met at Jonathan Canes as is above related. . . . Shee judgeth they might be there about 3 houres. She saith Mathew Abdee invited her to supper there, which was then provided. Shee confesseth one pynt of liquor was brought thither, she knows not by whom, and doth owne that after supper they had singing and dauncing. And saith Onesephorus came back Home with her to her uncles gate and there took leave one of another. 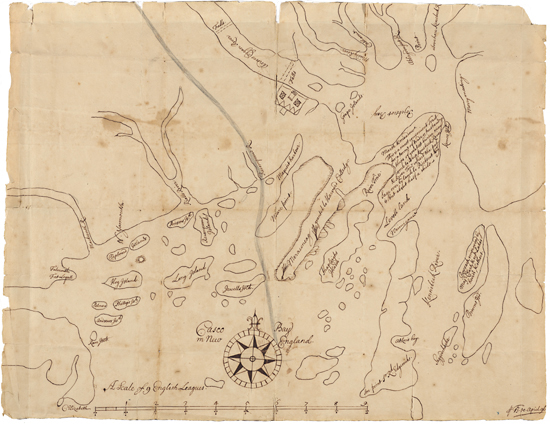 This map of Maine’s Casco Bay shows land initially granted to John and Elizabeth Endicott on May 6, 1657. In 1658, John Hull purchased the grant of land from the Endicotts and requested that it be laid out at Merriconeag Neck, Maine. The land was later inherited by Hannah Hull, who gave the acreage to Harvard.

With the upheavals of the French and Indian Wars, however, Merriconeag Neck had never been surveyed and the land was not considered legally to be in Harvard’s possession. In November 1731, the Harvard Corporation initiated a lawsuit to secure the property. The Court decided against the College in 1733, and Harvard lost the Merriconeag Neck lands.

The map itself is among the records that document Harvard’s management and oversight of the land and property from the mid-17th to the 19th century. These records provide insight into land settlement in colonial New England; the challenges of marking boundaries and establishing legal ownership of land; economic difficulties in the colonies; and the legal, interpersonal, and financial challenges of managing extensive property holdings.

Rules & orders proposed relating to a Divinity Professor in Harvard College in Cambridge in New England, 1721 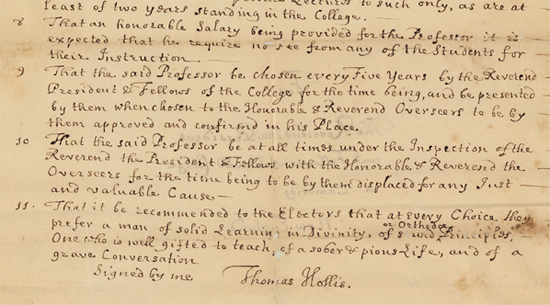 Thomas Hollis was Harvard’s most generous 18th-century benefactor. With great regularity, Hollis, a wealthy London merchant, sent books, money, scientific equipment, and funds for scholarships and professorships. A Baptist concerned about the perceived intolerance of New England’s majority Congregationalists, Hollis incorporated conditions into several of his deeds of gift that guarded against religious discrimination.

In August 1721, Hollis agreed to endow a Professorship of Divinity at Harvard, drafting a set of rules for the professorship that included a stipulation that the professor should be “a Masters of Arts, and in Communion with some Christian Church of one of the three Denominations, Congregational Presbiterian or Baptist.” Taking advantage of Hollis’s distance from Harvard, the Board of Overseers initially circumvented his request that Baptists not be precluded from the professorship. Hollis’s indications that he would remove Harvard from his will led to the Corporation’s promise to “observe religiously the will of ye donors & benefactors to ye said College in all disposal of their donations.” 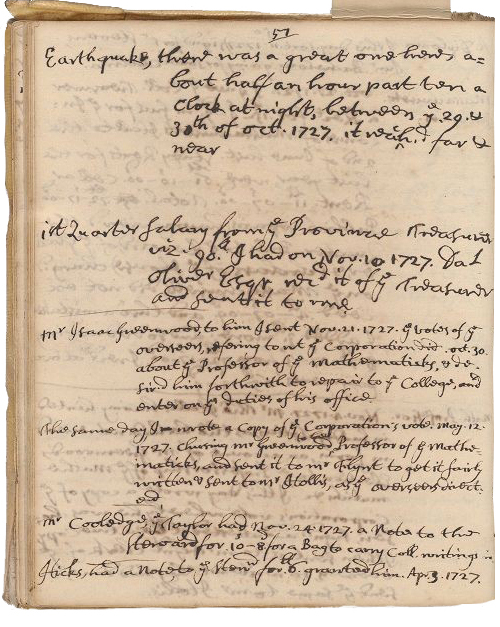 Late in the evening of October 29, 1727, an earthquake shook New England with such strength that a local newspaper described “Houses Rock’d & Crack’ld as if they were tumbling into Ruins.” Among the individuals surprised by the shaking earth was Harvard President Benjamin Wadsworth (1670–1737), who wrote in his diary:

Wadsworth, who had attended Harvard and received an AB in 1690 and an AM in 1693, had been appointed as the College’s eighth president only two years earlier. Throughout his administration, he placed great importance on thorough recordkeeping. He established a separate set of faculty records and formal lists of admitted students and graduates, and kept his own diary to note local events, including the 1727 earthquake. 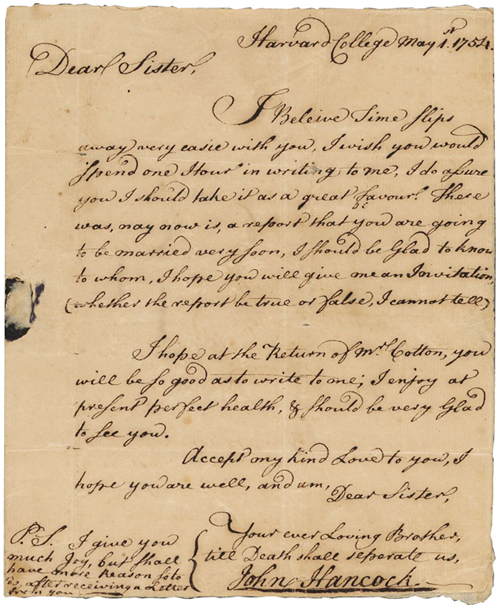 In May 1754, just a few months before his Harvard graduation, 17-year-old John Hancock (1737–1793) wrote a playful letter to his older sister Mary, asking her to write to him more often. John ended the letter with a postscript:

I give you much Joy, but shall have more reason so to do after receiving a Letter from you.

There are very few extant documents written by Hancock as a young man, and this letter offers one of the earliest examples of the signature that would later appear so famously on the Declaration of Independence.

As early as the 1740s, the Massachusetts General Court had instituted lotteries to raise money for military operations. This alternative to direct taxation was deemed popular, and, in 1765, the General Court passed legislation allowing Harvard College to run its own lottery to support dormitory building projects.

Harvard lottery tickets were distributed in 1772, but they did not meet with great success. As late as February 1775, many were left unsold. With the onset of the Revolutionary War, the lottery was canceled. According to the minutes of the Harvard Corporation:

The managers of the aforesaid lottery afterw'd gave it up, the war breaking out.

Letter from Samuel Langdon to John Hancock, 1776 May 30 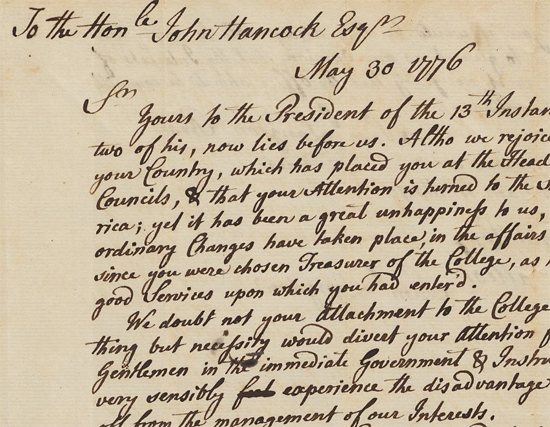 John Hancock was one of the wealthiest and most powerful alumni of 18th-century Harvard. He was elected Harvard’s treasurer on July 30, 1773—just two years prior to his election as president of the Continental Congress. That Hancock’s responsibilities during the Revolution compromised his service as Harvard’s treasurer is evident in a May 30, 1776, letter from President Samuel Langdon:

Altho we rejoice in the Call of your Country, which has placed you at the Head of its public Councils, & that your attention is turned to the Salvation of America; yet it has been a great unhappiness to us, that such extraordinary changes have taken place in the affairs of this Continent, since you were chosen Treasurer of the College . . .

For more than two years, Hancock remained unresponsive to pleas for help as Harvard’s financial situation deteriorated. In 1777, the Corporation elected a new treasurer—and Hancock learned of his dismissal from a newspaper advertisement. 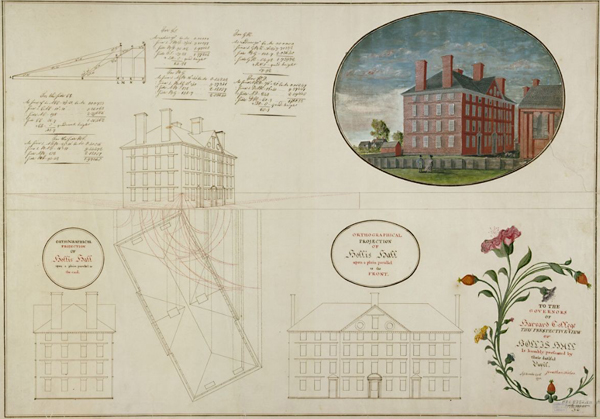 Beginning in the 1780s and continuing into the 1830s, Harvard juniors and seniors produced detailed mathematical equations and illustrative drawings and diagrams on large sheets of paper for academic exhibitions. These “mathematical theses” were chiefly concerned with astronomy, linear perspective, and surveying. Today, these unusual materials have enduring value as works of art.

Harvard undergraduate Jonathan Fisher presented his mathematical thesis, with its vivid gouache representation of Hollis Hall, to the College governors on September 27, 1791. The sheet itself measures more than two feet in width and displays architectural working plans for Hollis Hall.

Fisher was born in New Braintree, Massachusetts, in 1768 and received his Harvard AB in 1792 and his AM in 1795. In 1796, Fisher was ordained as the minister of the Congregational Church in Blue Hill, Maine, and was well known for his endeavors as an artist, architect, and furniture maker. In 1834, he published Scripture Animals, a children’s book with illustrations for every creature named in the Bible.

A Map of North America, 1784 by Joshua Green 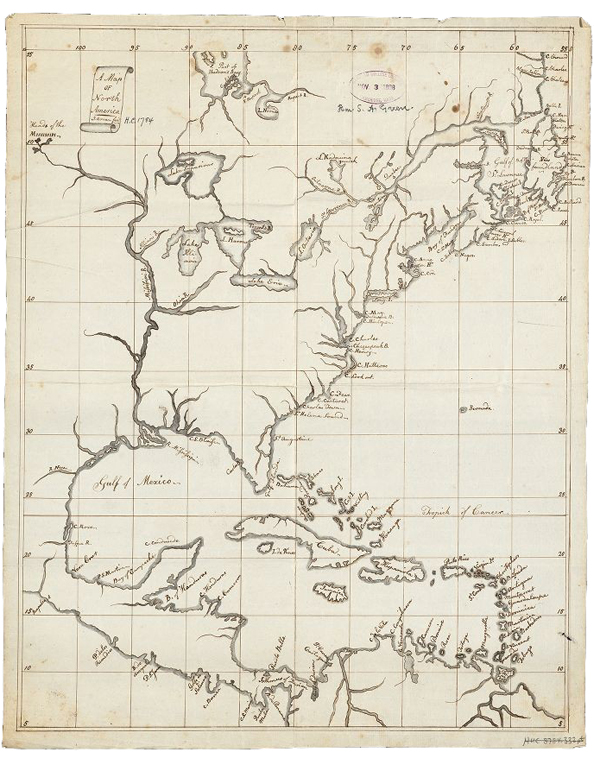 Joshua Green, a judge and legislator from Wendell, Massachusetts, created a series of drawings while he was an undergraduate at Harvard College between 1780 and 1784.

Four of the drawings depict Harvard and Cambridge buildings. The fifth item in the collection is the present map of North America. Carefully drawn in ink and watercolor, the map stretches from “part of Hudson’s Bay” in the north to Punta Mala, Costa Rica, in the south. Costa Rica was colonized by Spain at the time Green drew his map. The map is drawn on a grid whose lines represent latitude and longitude; the “Tropick of Cancer” is labeled, as are the “heads” of the Mississippi River.

It is not known if Green’s drawings were part of his academic work at Harvard College.They were donated to Harvard University by the artist’s grandson, Samuel Abbott Green, following his publication of Ten Fac-Simile Reproductions Relating to Old Boston and Neighborhood in 1901. 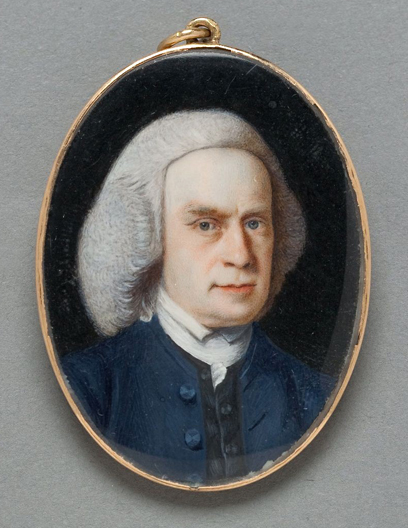 John Winthrop (1714–1779) served as Harvard’s Hollis Professor of Mathematics and Natural Philosophy from 1738 until his death in 1779. Born into a prominent New England family, he was the first important scientist to teach at Harvard. Winthrop’s curiosity and critical spirit were passed on to his students. He was a keen observer of natural phenomena and was largely responsible for the shift towards empirical reasoning and focused observation of the natural world in colonial science and science education.

The oval miniature, which measures less than two inches across, portrays Winthrop in a full white wig and dark blue robe. The artist and date of the painting are unknown. It was donated to the Harvard University Archives in 1998 by Alicia Bradford Pardee Sours.