History of the Charter of 1650

Iconography and Artistic Details of the Charter of 1650

Transcription of the Charter of 1650

Conservation of the Charter of 1650

View Online and Learn More about the Charter of 1650

History of the Charter of 1650

Harvard College was founded by a vote of the Great and General Court of Massachusetts on October 28, 1636. The vote allocated "400£ towards a schoale or colledge." Following the appointment of Nathaniel Eaton as master in 1637, the College opened in 1638. After Eaton’s dismissal, Henry Dunster was appointed Harvard’s first president in 1640.

The General Court established Harvard’s Board of Overseers in 1642, but it was the Charter of 1650 that created the Harvard Corporation as the College's executive governing board and defined its composition and authority.

Drafted by Henry Dunster, the Charter of 1650 called for the Harvard Corporation to consist of seven individuals: the President, five Fellows, and a Treasurer. The Charter named the Corporation as the "President and Fellowes of Harvard College" and transferred to them, in "perpetual succession," the duties of managing the College.

As stipulated in the Charter, the Corporation had the authority to manage the College's finances, properties, and donations, act as a legal entity in courts of law, select “officers and servants,” establish a College seal, and create orders and bylaws for the College, with the approval of the Board of Overseers. The Charter called for the College and its staff to receive some exemption from “taxes and rates” related to its operations and stated that local law enforcement officials would have only limited power on campus, thus instituting the precedent of internal discipline in all but the most extreme cases.

Dunster generally outlined Harvard’s educational scope in the Charter. It expressly states that the College “may conduce to the education of the English and Indian youth of the country” in “all manner of good literature, arts, and sciences” thereby endorsing the liberal arts rather than a strictly religious curriculum.

The first changes to the Corporation’s structure since 1650 were implemented in 2010. These include an expansion of the number of Fellows, the establishment of terms of service for Fellows, and the creation of standing committees.

Iconography and Artistic Details of the Charter of 1650

According to Harvard historian Samuel Eliot Morison, Henry Dunster, Harvard 's first president, most likely drafted the Charter of 1650. Dunster’s name is engrossed in large script along the right side of the document as “President.” The Governor of the Massachusetts Bay Colony, Thomas Dudley, endorsed the charter on May 30, 1650, as the tag on the bottom of the document bears his name.

Written in English, the text of the charter was engrossed on parchment by an unknown calligrapher in the Massachusetts Bay Colony. It is believed that the artist may have been influenced by the calligraphy and iconography of the royal charters of contemporary British educational institutions, such as the University of Oxford, and, in particular, Wadham College.

Most prominent among the embellishments is the "W" in the first word, “whereas.” On the lower left side of the “W,” a man aims a bow and arrow at a squirrel that is seated in the upper curl of the initial flourish. Beside the man, a dog stands at attention. 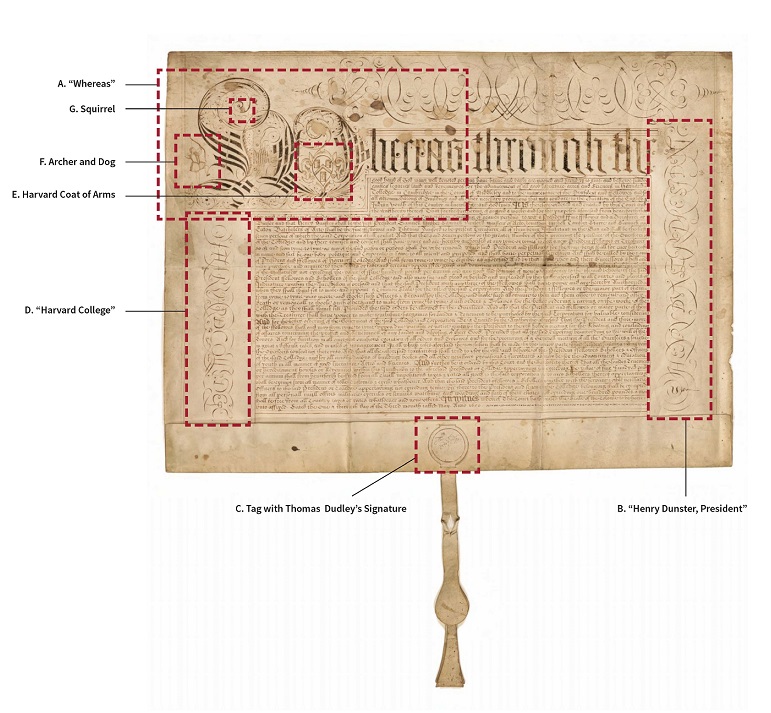 A. “Whereas” The artistic elements in the Charter show the influence of calligraphy and iconography found in the royal charters of contemporary British educational institutions. These employed elaborate cursive characters for visual effect.

B. “Henry Dunster, President” Henry Dunster, a graduate of Magdalene College at Cambridge University, was appointed president of Harvard College in 1640—with Dunster himself having chosen the title in reference to a similar position at Cambridge. His name is engrossed in large script along the right side of the document as “President.”

E. Harvard Coat of Arms This early version of the College arms bears a chevron and three closed books, but does not include any inscription or motto. As with the other decorative elements in the Charter, this design may have followed European traditions, as the iconography of the arms of European universities often depicted books.

F. Archer and Dog Note the archer standing on the lower left side of the “W.” His arrow is strung and his aim is directly at the squirrel above. The archer’s dog, obviously ready to spring, looks up at his master. Note the curl of the dog’s tail—and its interplay with the flourishes of the “W.”

G. Squirrel A small squirrel is seated high on the upper curl of the initial elaborate “W.”

Transcription of the Charter of 1650

The Charter of the President and Fellows of Harvard College under the seal of the Colony of Massachusetts Bay and bearing the date May 31st A.D.1650

Whereas through the good hand of God many well devoted persons have been and daily are moved and stirred up to give and bestow sundry gifts legacies lands and revenues for the advancement of all good literature arts and sciences in Harvard College in Cambridge in the County of Middlesex and to the maintenance of the President and Fellows and for all accommodations of buildings and all other necessary provisions that may conduce to the education of the English and Indian youth of this country in knowledge and godliness. It is therefore ordered and enacted by this Court and the authority thereof that for the furthering of so good a work and for the purposes aforesaid from henceforth that the said College in Cambridge in Middlesex in New England shall be a Corporation consisting of seven persons (to wit) a President five Fellows and a Treasurer or Bursar and that Henry Dunster shall be the first President Samuel Mather Samuel Danforth Masters of Arts Jonathan Mitchell Comfort Starr and Samuel Eaton Bachelors of Arts shall be the five Fellows and Thomas Danforth to be present Treasurer all of them being inhabitants in the Bay and shall be the first seven persons of which the said Corporation shall consist And that the said seven persons or the greater number of them procuring the presence of the Overseers of the College and by their counsel and consent shall have power and are hereby authorized at any time or times to elect a new President Fellows or Treasurer so oft and from time to time as any of the said person or persons shall die or be removed which said President and Fellows for the time being shall for ever hereafter in name and fact be one body politic and corporate in law to all intents and purposes and shall have perpetual succession And shall be called by the name of President and Fellows of Harvard College And shall from time to time be eligible as aforesaid. And by that name they and their successors shall and may purchase and acquire to themselves or take and receive upon free-gift and donation any lands tenements or hereditaments within this jurisdiction of the Massachusetts not exceeding the value of five hundred pounds per annum and any goods and sums of money whatsoever to the use and behoof of the said President Fellows and scholars of the said College and also may sue and plead or be sued and impleaded by the name aforesaid in all Courts and places of judicature within the jurisdiction aforesaid and that the said President with any three of the Fellows shall have power and are hereby authorized when they shall think fit to make and appoint a common seal for the use of the said Corporation. And the President and Fellows or the major part of them from time to time may meet and choose such officers and servants for the College and make such allowance to them and them also to remove and after death or removal to choose such others and to make from time to time such orders and by-laws for the better ordering and carrying on the work of the College as they shall think fit. Provided the said orders be allowed by the Overseers. And also that the President and Fellows or major part of them with the Treasurer shall have power to make conclusive bargains for lands and tenements to be purchased by the said Corporation for valuable considerations. And for the better ordering of the government of the said College and Corporation be it enacted by the authority aforesaid that the President and three more of the Fellows shall and may from time to time upon due warning or notice given by the President to the rest hold a meeting for the debating and concluding of affairs concerning the profits and revenues of any lands and disposing of their goods. Provided that all the said disposings be according to the will of the donors. And for direction in all emergent occasions execution of all orders and by-laws and for the procuring of a general meeting of all the Overseers and society in great and difficult cases and in cases of non-agreement. In all which cases aforesaid the conclusion shall be made by the major part the said President having a casting voice the Overseers consenting thereunto. And that all the aforesaid transactions shall tend to and for the use and behoof of the President Fellows scholars and officers of the said College and for all accommodations of buildings books and all other necessary provisions and furnitures as may be for the advancement and education of youth in all manner of good literature arts and sciences. And further be it ordered by this Court and the authority thereof that all the lands tenements or hereditaments houses or revenues within this jurisdiction to the aforesaid President or College appertaining not exceeding the value of five hundred pounds per annum shall from henceforth be freed from all civil impositions taxes and rates all goods to the said corporation or to any scholars thereof appertaining shall be exempted from all manner of toll customs and excise whatsoever. And that the said President Fellows and scholars together with the servants and other necessary officers to the said President or College appertaining not exceeding ten, viz. three to the President and seven to the College belonging shall be exempted from all personal civil offices military exercises or services watchings and wardings and such of their estates not exceeding one hundred pounds a man shall be free from all country taxes or rates whatsoever and none others.

In witness whereof the Court hath caused the seal of the colony to be hereunto affixed. Dated the one and thirtieth day of the third month called May. Anno 1650.

Conservation of the Charter of 1650

In April of 2007, the Charter of 1650 underwent conservation treatment at the Weissman Preservation Center in the Harvard Library. Conservation stabilized the ink on the parchment to prepare the Charter for digitization, and a special frame with UV-filtering glass and impermeable backing was created to house and display the Charter. After the Charter was photographed, it was re-matted to keep the parchment from direct contact with glass in the new frame, further protecting the document from abrasion and damage.

View Online and Learn More About the Charter of 1650