The Harvard seal was first established in the 17th century as a legal symbol of authentication to validate official documents created by the University's governing bodies. Between the earliest depiction of the College seal in 1643 and the present-day version, there have been multiple designs. While all have incorporated a shield emblazoned with three books, the use of inscriptions, including Veritas, and embellishments such as chevrons, open and closed books, book latches, hatching, and shield shape have varied over the years. 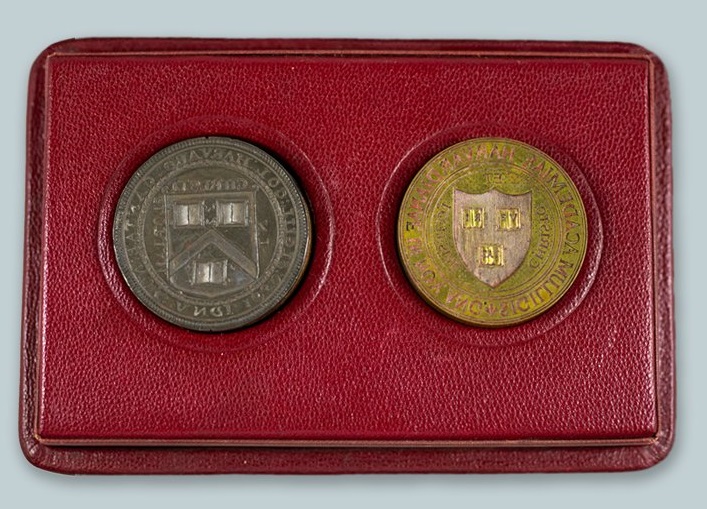 The Seal of 1650 The seal of 1650, also known as the In Christi Gloriam seal, depicts a square shield emblazoned with three open books separated by a chevron. The seal includes the motto IN CHRISTI GLORIAM and the border inscription SIGILL COL HARVARD CANTAB NOV ANGL 1650.

The Appleton Seal of 1885 In 1885, the Corporation adopted a new design for the seal, based on President Quincy's 1843 seal, that incorporated both the motto "Veritas" and "Christo et Ecclesiæ." The new seal was created by William Sumner Appleton (Harvard AB 1860) and included a triangular shield emblazoned with three open books showing the motto "Veritas." The shield is bordered by the motto CHRISTO ET ECCLESIÆ and the outer border bears the inscription: SIGILLVM ACADEMIÆ HARVARDINÆ IN NOV. ANG. Harvard’s current seal combines elements of the Appleton seal with the Harvard arms designed by Pierre la Rose in the 1930s.

[Not shown] President Quincy’s Seal of 1843 In the 1830s, while conducting research for his book on the history of Harvard, President Josiah Quincy found in the College archives the 1643 sketch for a College arms and proposed that it be reestablished. The Corporation voted in 1843 to adopt a version of this design as the "common seal of Harvard College."