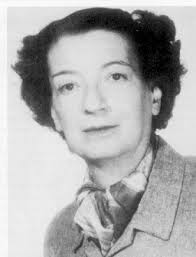 Paleoneurology, the study of fossil brains, was founded in Germany in the 1920s and was the product of the work of Ottilie ("Tilly") Edinger (1897-1967). With a background in both neurology and paleontology, Edinger was able to combine knowledge of the two fields and change our understanding of the evolution of the vertebrate brain.

Johanna Gabrielle Ottelie Edinger was born into a well-to-do family in Germany in 1897; her father was an eminent neurologist and a role model for Tilly. In university she studied zoology, geology and paleontology, in the course of which she encountered the skull of a Mesozoic marine reptile with an intact natural brain cast. So-called fossil brains are formed when sediments fill an animal's empty cranium after death and solidify. Edinger's first published paper was a description of this specimen.

After university, Edinger worked at a couple of German paleontological institutions as an unpaid volunteer. She was noted for her careful curatorial work, descriptions and popular articles, but she also began collecting literature about fossil brains, organizing it, and putting it together in a book, creating the field that became known as paleoneurology - the study of fossil brains. She also worked on the Sirenia or sea cows, a group of marine mammals.

However, life in Nazi Germany became more and more restricted, and after many difficulties and with the help of various other researchers Edinger eventually emigrated, first to London and then to the U.S. in May 1940. In the U.S. she came to the Harvard Museum of Comparative Zoology. She was the only female to attend the first meeting of the Society of Vertebrate Paleontology in December 1940, though she had to take on some outside work such as translating to make ends meet. Eventually her research was funded and she was able to concentrate on paleoneurology.

Edinger is especially noted for her research in four main areas:

Edinger's contributions to paleoneurology were vitally important to developing this new field. She was widely respected by her colleagues, not only for her work but for her informal and generous personality; she was a mentor to many budding paleoneurologists and gave unstintingly of her time. She died in 1967 as the result of a traffic accident, but her work lives on.

As a Jew, Edinger was forced to leave Nazi Germany in 1938. Through friends she was put in touch with Alfred S. Romer, well-known Harvard paleontologist (for whom Romer Hall in the Museum of Comparative Zoology - the MCZ - is named) and he was able to give her a position, initially unpaid, at the MCZ. This page looks at her career in the U.S. and especially her work here at the Museum. Today many of her papers are in the Ernst Mayr Library of the MCZ, and many of the brain casts on which she worked are in the MCZ's Mammalogy Collection.