This guide is an introduction to material related to Amelia Earhart held at the Schlesinger Library and other manuscript repositories. 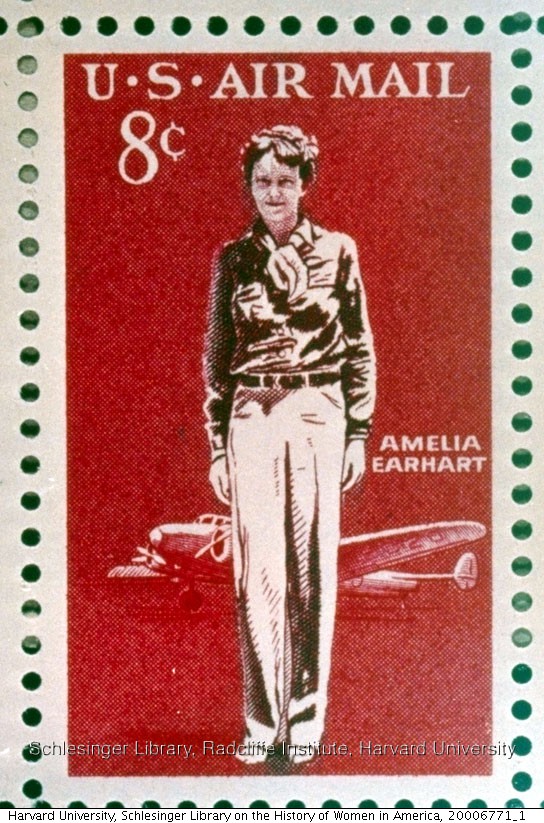 Start your archival research on Amelia Earhart with this guide.

Amelia Earhart was an airplane pilot who participated in numerous air races and held a variety of speed records and "firsts": she was the first woman to fly across the Atlantic solo (1932) and first person to fly solo from Honolulu, Hawaii, to Oakland, California (January 1935), and from Los Angeles to Mexico City (April 1935). Earhart was a mentor of other women pilots and worked to improve their acceptance in the heavily male field of aviation. In 1929 she helped organize the Ninety-Nines, an international organization of licensed women pilots, and she served as its president until 1933. Earhart conducted grueling nationwide lecture tours, which largely financed her flying, and wrote books and articles on women and aviation. An outspoken advocate of women's equality, Earhart also designed sportswear for women, luggage suitable for air travel, and travel stationery.

Earhart made two attempts to fly around the world in 1937. The first, in March, ended when her airplane was badly damaged on take-off in California. On June 1 she took off from Miami with navigator Fred Noonan, intending to fly around the equator from west to east. On July 2, having completed 22,000 miles of the trip, Earhart and Fred Noonan took off from Lae, New Guinea, for Howland Island. They never reached the island. Despite an intensive search by the United States Navy and others, following radio distress calls, no trace of the fliers or their plane has ever been found.