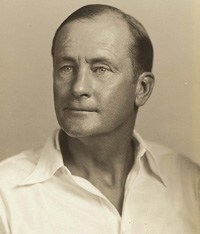 Samuel Eliot Morison was born on July 9, 1887, in Boston, Massachusetts to John Holmes Morison and Emily Marshall Eliot Morison. He had one younger brother, John Bradford Morison (1889-1970). Morison was named after his maternal grandfather Samuel Eliot (Class of 1839), a historian, educator, and former president of the American Social Science Association. Until his death, Samuel Eliot encouraged his grandson’s early interest in history and sailing. Morison attended Noble and Greenough School (1897–1901) and St. Paul’s in Concord, NH (1901–1903).

Morison spent a year studying at the École des Science Politiques in Paris before returning to Harvard to begin a PhD in History. He served as Assistant in History from 1910-1912. Morison completed a dissertation on his “great-grandfather,” Harrison Gray Otis, in 1912, which was published the next year as The Life and Letters of Harrison Gray Otis, Federalist, 1765–1848 (1913). He was appointed “John Harvard Fellow” in June 1912. Morison then spent a year teaching history at the University of California, Berkeley. He returned to Harvard as Instructor in History in 1915 and became a Lecturer on History in 1918.

Looking to participate in World War I after being refused enlistment in the Field Artillery Officers’ training camp for supposedly “pro-German” sympathies, Morison was called to the Peace Conference in Paris from January to June of 1919. He joined the Russian Division of the American Commission to Negotiate Peace under R. H. Lord, in which he focused on Finland, Estonia, Latvia, and Lithuania. He wrote a memoir of his experience. From 1922-25, Morison served as the first Harold Vyvyan Harmsworth Professor of American History at Oxford University, returning to Harvard as a full Professor of History. On January 4, 1926, he was appointed the official historian for Harvard’s Tercentenary Anniversary. In 1942, after a year teaching at the Johns Hopkins University, he was appointed the Jonathan Trumbull Professor of American History at Harvard University. He retired from the University on June 30, 1955.

During World War II, Morison was granted a leave of absence from Harvard in order to serve as Official Historian of U. S. Naval Operations during the war, a position acquired with the help of President Franklin D. Roosevelt. During the war, Morison took on the services of Antha E. Card (1908-2003?), who served as his secretary, research assistant, and copy editor for decades after. He saw combat in various theaters of war and was awarded the Legion of Merit for his service. Morison left the Naval Reserve in 1951 with the rank of Rear Admiral.

Morison published over thirty books during his lifetime, with an early focus on the history of Colonial New England. While researching his works on Christopher Columbus (The Second Voyage of Columbus, 1939; Admiral of the Ocean Sea, 1942), Morison organized a voyage that became known as the Harvard Columbus Expedition (1939-1940), which retraced Columbus’s journey from Europe to the Americas. During the journey, Morison and his crew were some of the first American visitors to post-Civil War Spain. Years later, Morison revisited the Caribbean by aircraft with his co-author Mauricio Obregón (1921-1998) for their book The Caribbean as Columbus Saw It (1969).

Morison won numerous prizes for his historical writing. He received the Loubat Prize in 1938 for The Founding of Harvard College (1935) and Harvard College in the Seventeenth Century (1936). The Rising Sun in the Pacific in 1948, Volume Three in his History of United States Naval Operations in World War II, won Columbia University’s Bancroft Prize in History (1949), which Morison received again in 1972 for The European Discovery of America: The Northern Voyages (1971). He was a two-time winner of the Pulitzer Prize, first for Admiral of the Ocean Sea (1942) and then later for John Paul Jones: A Sailor’s Biography (1959). In 1962, Morison became the first winner of the International Balzan Foundation Award for History, an honor intended to serve as the Nobel Prize for history.

He received the National Institute of Arts and Letters Gold Medal in 1962 and the Medal of Freedom in 1964 from President Lyndon B. Johnson.