Map Showing the Dispersal of the Children of Noah 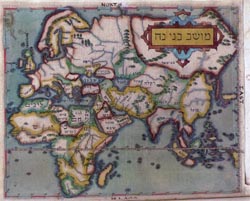 Inserted in A Concent of Scripture.

Harper Atlas of the Bible (Print Only)

[Atlas Stand G2230.H47 1987] The Harper Atlas contains photographs and articles on a variety of subjects relating to the material and physical culture of the biblical world. It also includes both traditional flat maps and maps that take into account the curvature of the earth. The position of north varies from map to map.

[Ref. G2230.A2 1993] The Macmillan Atlas is arranged by topic. Each topic has an article (usually around 150-200 words) and an accompanying map. Conquests and campaigns are particularly well covered.

Oxford Bible Atlas includes photographs, maps, chronological charts, as well as helpful textual information on biblical periods, and the peoples and civilizations of the ancient Near East. A print version is also available [Ref. BS630.O96 2007].

The Sacred Bridge (Print Only)

[Atlas Stand BS630.R356 2006] The Sacred Bridge is an extension of the 1993 Macmillan Bible Atlas, with a broader definition of the biblical world. It covers the entire eastern Mediterranean littoral known as the "Levant." It is arranged historically from the third millennium bce to the second century ce. Special attention is given to ancient written sources of geographical information, as well as to current archaeological research.