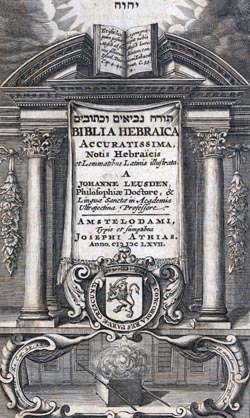 Joseph ben Abraham Athias (1634/34-1700) was a publisher and printer in Amsterdam. Born into a Marrano family in Spain or Portugal, he fled to Hamburg as a youth so he might openly practice his religion. In 1658 he began publishing books in Amsterdam, and his press soon became one of the leading ones there printing books in Hebrew, Dutch, and Latin, and some one million English Bibles for England and Scotland. The famous Hebrew Bible he produced, which became the standard for over two centuries, was prepared under the editorial supervision of Johannes Leusden, Professor of Hebrew at the University of Leyden. For his first edition in 1661 (3,000 copies), Athias was elected to the printer’s guild in Amsterdam, and for the improved edition of 1667 (dispayed here), the Dutch government presented him with a gold medal and chain. After printing the first few pages of this edition, Athias raised the number of copies from 4,500 to 5,000, and so had to print the first pages for the additional copies. This copy includes those newer pages, indentified by the omission of the maqqeph between the first two words of Gen. 8:18.

Bible in English (Harvard Login) has twenty versions of the Bible from the tenth to the twentieth century.  Texts from the Protestant, Roman Catholic and non-conformist traditions are represented.

Bible Gateway is a free service for searching and reading a variety of  English translations. It excludes the "study bibles" offered in Oxford Biblical Studies Online (Harvard Login).

At Andover-Harvard Theological Library (and at other libraries), English language Bible are found in the reference collection and in the stacks at BS135-198. The call number for the New Revised Standard Version is BS191.5.

Hebrew Bibles in the reference collection and in the stacks have the call number beginning with BS715:

Greek New Testaments in the reference collection and in the stacks have the call number BS1965.