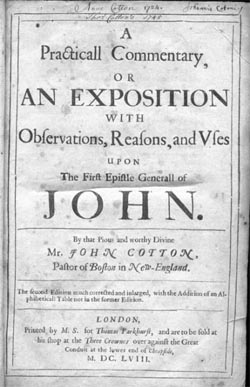 A Practical Commentary: Or an Exposition with Observations, Reasons, and Uses upon the First Epistle Generall of John. 2d ed.

There are many commentaries, and some are published as series of volumes. Below are some of the major series in English.   Please note that some series are incomplete, with more volumes still being written.

The Anchor Bible commentaries are intended for the general reader, yet are stringent in their linguistic and historical scholarship. Hebrew and Greek words are transliterated. The Anchor Yale Bible Commentaries are also available in print.

Ancient Christian Commentary on Scripture (Some volumes are Print Only)

This series is an edited collection of early Christian writers' comments on the Bible in English translation. Depending upon the volume, short descriptions and chronologies of authors and anonymous works may be included in an appendix. An author index is included, along with a bibliography of original sources. The scope of the included material is somewhat limited, due to the editorial decision to focus on material appropriate for a lay audience and useful for common worship and spiritual formation. For scholarly work, it is suggested that the researcher utilize comment citations to locate the original source of the comment and read it in context.

An Asian Introduction to the New Testament (Harvard Login)

This is a collection of essays on New Testament texts created by a mulitnational, mulitfaith group of Asian scholars.

Each volume is an anthology of scholarly essays on a New Testament or early Christian text (e.g., Mark) or text collection (e.g., New Testament Apocrypha).

Hermeneia (Some volumes are Print Only)

This series offers commentaries on canonical, pseudepigraphic, and Apocryphal texts, employing a wide range of methodology within historical-critical interpretation, including textual criticism, history of tradition, history of religion, and contemporary literary analysis. All citations from ancient sources are translated into English.

International Critical Commentary (Some volumes are Print Only)

This series is concerned with detailed analysis of archeological, historical, hermeneutical, and theological questions relating to the text. Practical and homiletical topics are generally avoided. The series was made to be accessible to the reader who lacks knowledge of Greek or Hebrew. The original series was begun in 1895, and the new series was inaugurated in 1975 to take advantage of more recent scholarship, discoveries, and methodology. Even though the original series is older, many volumes are still relevant to the field of biblical studies.

Interpretation: A Bible Commentary for Teaching and Preaching (Some volumes are Print Only)

This series is an aid for homiletical and educational work, combining historical and theological inquiry.

These commentaries facilitate the use of critical scholarship in practical, pastoral applications. There are two commentaries for each biblical passage, one exegetical and the other homiletical or reflective. The King James and Revised Standard versions of the Bible are placed side by side for comparison in the older series; the New International Version and the New Revised Standard Version are used in the new series.

This series is published by the Jewish Publication Society and integrates rabbinic tradition into a series of commentaries on the first five books of the Hebrew Bible. The degree of engagement with source and textual criticism varies from volume to volume, but is generally conservative insofar as the Torah is viewed in its final (Jewish) canonical form. Linguistic matters along with Near Eastern literary and archeological discoveries are well treated. Detailed texts on particular topics are included in each volume. The JPS Bible Commentary series is a continuation of the JPS Torah Commentary, offering volumes on books from the Writings and Prophets.

New International Commentary (Some volumes are Print Only)

These commentaries are written from the perspective of Reformed theology. While theologically motivated, the commentaries are conversant with modern, critical scholarship. The introduction and main exposition of texts are in English, with more technical philological matters dealt with in footnotes, special notes, and appendixes. Revisions of some volumes have been published.

Old Testament Library (Some volumes are Print Only)

This series treats theological and literary dimensions of the Bible within the methodological framework of modern critical scholarship. Some volumes are translations of older works from the German series Das Alte Testament Deutsch. Others are commentaries original to the Old Testament Library, and still others are studies of themes and genres, as opposed to individual texts.

Reformation Commentary on Scripture (Print Only)

Each volume consists of the collected comments on biblical passages by leaders of the Reformation. including  Lutheran, Reformed, Anglican, Anabaptist, and even reform-minded Catholic thinkers .  All texts are in English, and some are translated for the very first time.

Not a series, but a groundbreaking feminist commentary on texts related to women in the biblical world, bringing to the fore the suppressed voices and subjugated knowledge of times past.

Not a series, but a notable scholarly biblical commentary that interprets texts through the lens of African American experience..

Word Biblical Commentary (Some volumes are Print Only)

This commentary is written from an interdenominational, yet clearly conservative Christian perspective. Hebrew and Greek words are used, with Greek words left in their original script. Treatment of texts is divided into four sections: transition, notes, form/structure/setting, and comment.