Rachelle Gaudet, Professor of Molecular & Cellular Biology, and her lab members investigate the structure of proteins on the atomic scale using X-ray crystallography. Proteins are nano-scale machines that carry out important processes in our cells. The 3-dimensional arrangement of amino acids in proteins provides valuable insight into how they carry out their biological functions. The interactions between X-rays and the atoms in a protein produce diffraction patterns, which Professor Gaudet and her lab collect and analyze to reconstruct a 3D model containing the position of every atom in the protein. 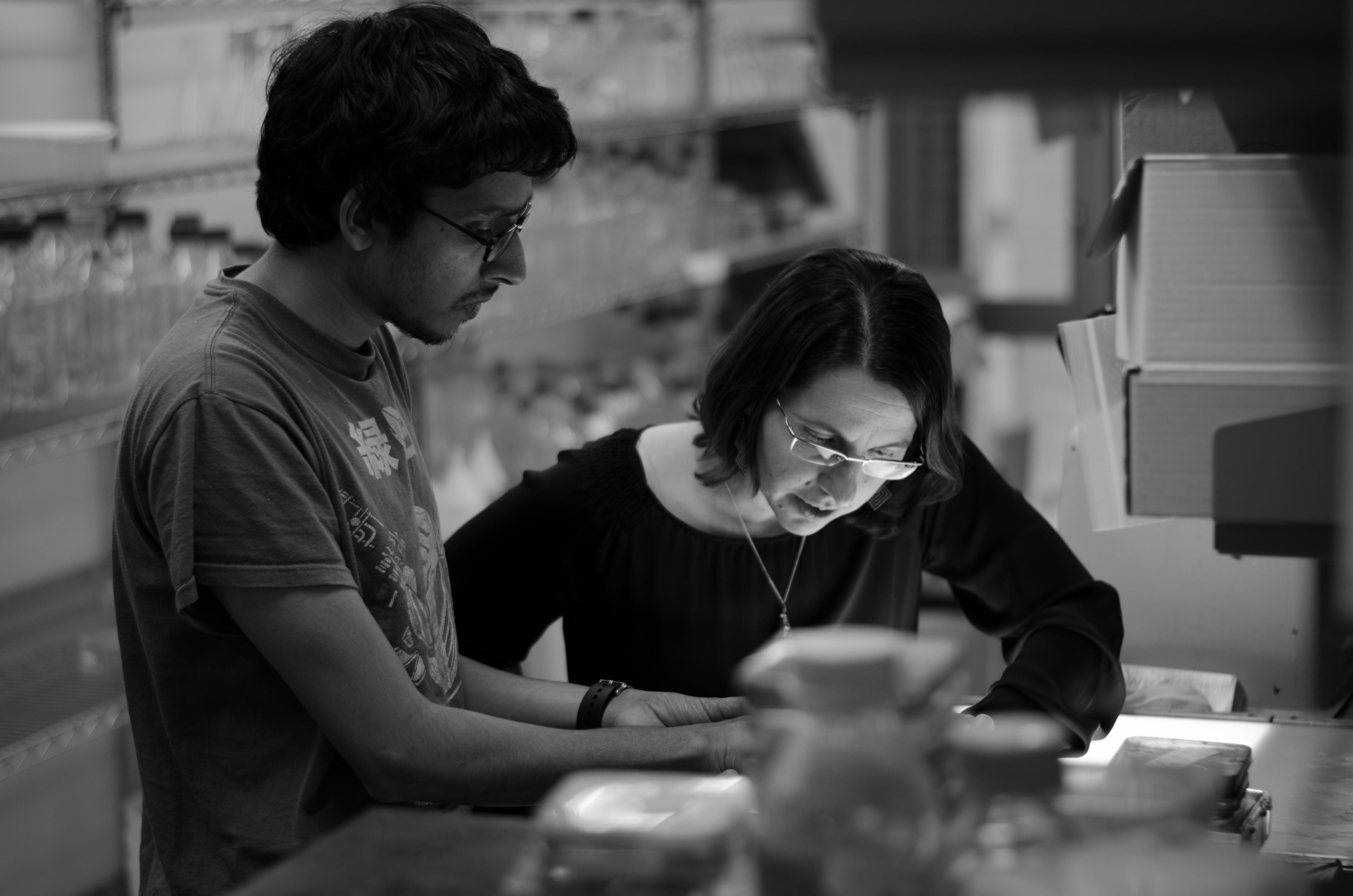 Gaudet also uses some unique teaching methods, as in Dance Your Ph.D. She and a colleague explain "Structural analysis of phosducin and its phosphorylation-regulated interaction with transducin beta-gamma." Or you can learn about "Life and death of a TRPV1 ion channel..."​ TRPV1, also known as the capsaicin channel, is important in regulating body temperature.

Pardis Sabeti is a Professor in OEB and the Harvard School of Public Health, in addition to being a Howard Hughes Medical Institute Investigator. She operates a research lab at the Broad Institute of Harvard and MIT. The goals of her lab are to use computational methods and genomics to understand mechanisms of evolutionary adaptation in humans and pathogens. They are particularly interested in examining host and viral genetic factors driving resistance to Lassa fever in West Africa. They hope that by examining signals of natural selection in pathogens, including Lassa virus, Ebola virus and Plasmodium falciparum malaria to understand how they rapidly evolve in order to guide long term intervention strategies. 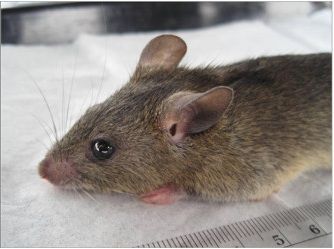 Lassa fever, Ebola, and malaria are all serious diseases. Everyone remembers the 2013-2015 outbreak of Ebola virus in West Africa. Sabeti’s team of scientists played in integral role in curbing the epidemic by sequencing and analyzing viral isolates from human patients in near real-time. And revolutionarily sharing those results with researchers and the general public to solicit collaboration while her own lab was mining through the results to help save the lives of her close collaborators who unfortunately succumbed to the deadly virus. This novel method of publicly sharing data was unheard of, and something Sabeti has been an avid spokesperson for a concept that she has followed through with on subsequent projects studying the Zika Virus epidemic in the Americas and now the current Lassa Virus outbreak in West Africa.  Cases of Lassa fever in West Africa have increased sharply in early 2018. The virus that causes the disease is spread mainly by multimammate rats of the genus Mastomys, which is widespread across Africa. Lassa fever is difficult to diagnose in the early stages (symptoms are similar to those of malaria or typhoid, so no one really knows the true incidence of the disease. It kills 20-30% of those it sickens, and there is no vaccine or reliable treatment. Sabeti is motivated to empower African scientists to intervene during an outbreak by extensively training scientists through the African Centre of Excellence for the Genomics of Infectious Disease (ACEGID). Every year, Sabeti invites scientists from throughout Africa to learn more about foundational genetics and genomics along with advanced next-generation sequencing at her lab at Harvard and the Broad Institute of MIT and Harvard. She hopes to minimize the effects of future outbreaks by empowering local scientists with the knowledge and tools necessary to combat an agent that cannot even be seen.

Thanks to Rickey Shah for helping with the exhibit and this guide! 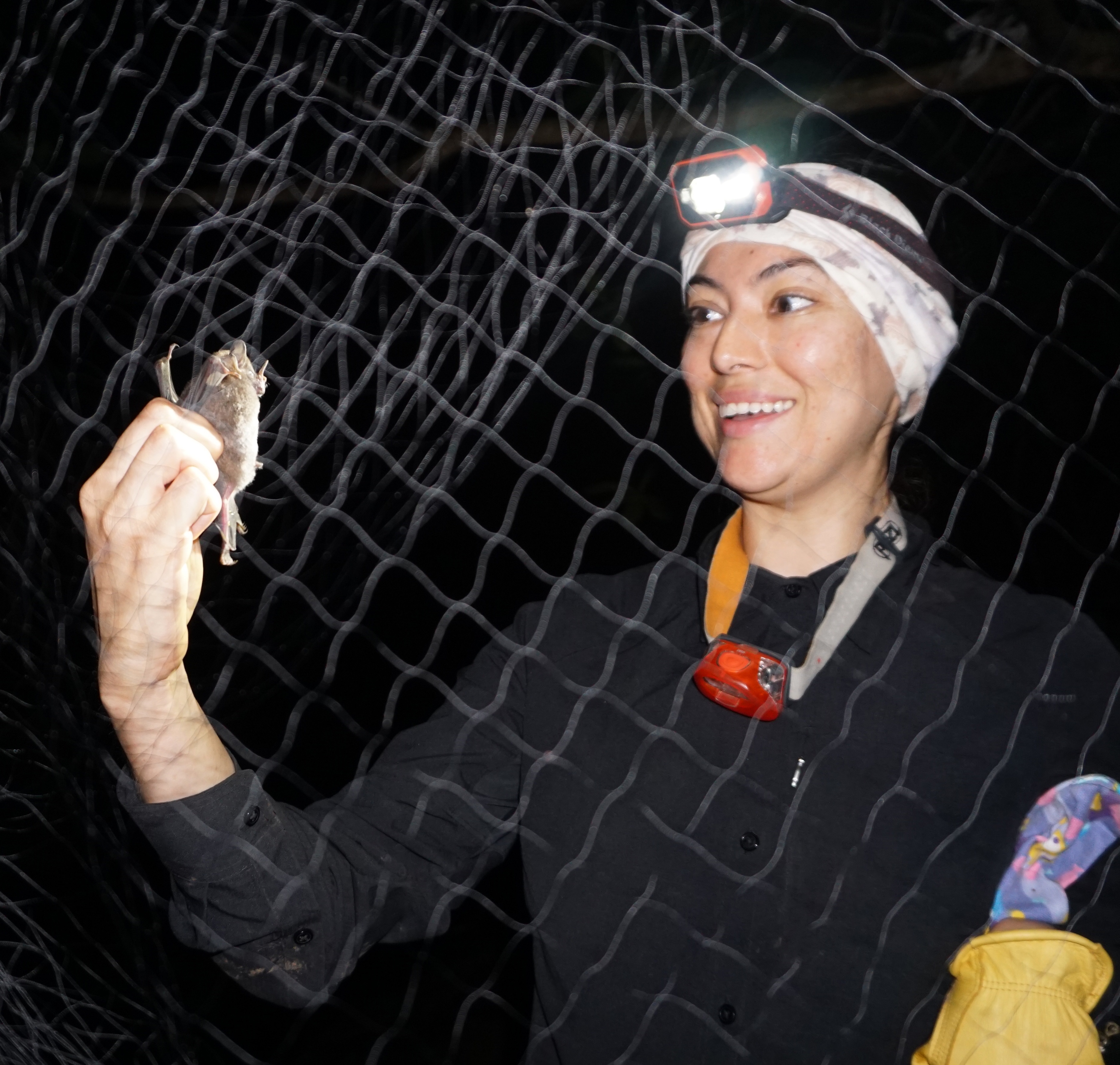 ​Jasmin Camacho is a National Science Foundation Predoctoral Fellow working toward her Ph.D. in the Tabin Lab at Harvard Medical School. She studies New World Leaf-Nosed bats (Chiroptera: Phyllostomidae) found throughout Central and South America and the Caribbean islands. As a group, they have evolved an extraordinary array of distinct faces and skulls adapted for consuming many different food types, including insects, fruit, nectar, pollen, small vertebrates and even blood!

To understand the molecular basis for evolutionary changes, she compares different facial shapes within a phylogenetic framework using genetic and developmental approaches. To this end, she uses 1) high-resolution microCT imaging in combination with 3D morphometrics and phylogenetic analysis; 2) comparative in situ analysis of gene expression between species; 3) comparative transcriptomics during midfacial development; and 4) experimental embryology. Photos by Danny Hargreaves of Trinibats.

Camacho is passionate about fostering an inclusive environment in academic labs and promoting ways culture and community can enhance scientific discovery. She explores ways in which science outreach can empower communities and inspire aspirations. 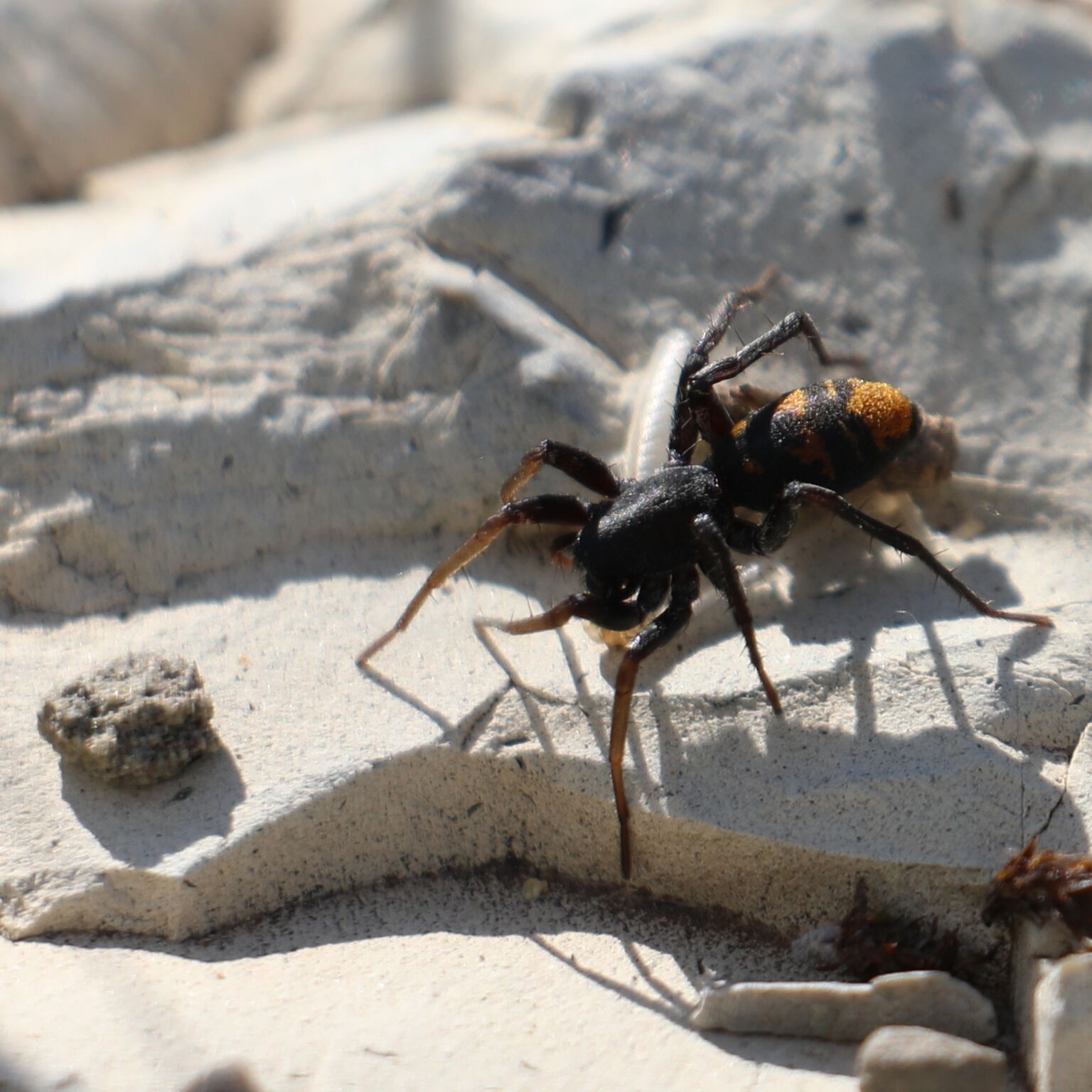 Sarah Kariko, Associate in OEB, is collaborating with Maggie Raboin of the University of California at Berkeley in studying the mason spider Castianeira sp., a unique eight-legged architect that lives in northwestern Wyoming. Females make their homes on rocks in canyons as well as in forested areas and high mountain plateaus, and they are the only spider species known to build mounds on top of their egg sacs.

The female is incredibly strong. She can lift objects more than a third her own body size and carry them in the blazing heat with her jaws. When the rock temperatures soar to 135 degrees Fahrenheit, she does not stop working, walking on her clawtips and carrying objects to build her mound. She will haul more than 300 objects - rocks, pieces of wood, seeds, snail shells, leaves, flower blossoms, cricket legs, insect wings - to top her silken egg sac. She builds for hours - sometimes constructing her egg sac and building her mound from sunrise to sundown. Photo by Sarah Kariko, shot with a Canon f 100-400mm with extension tubes 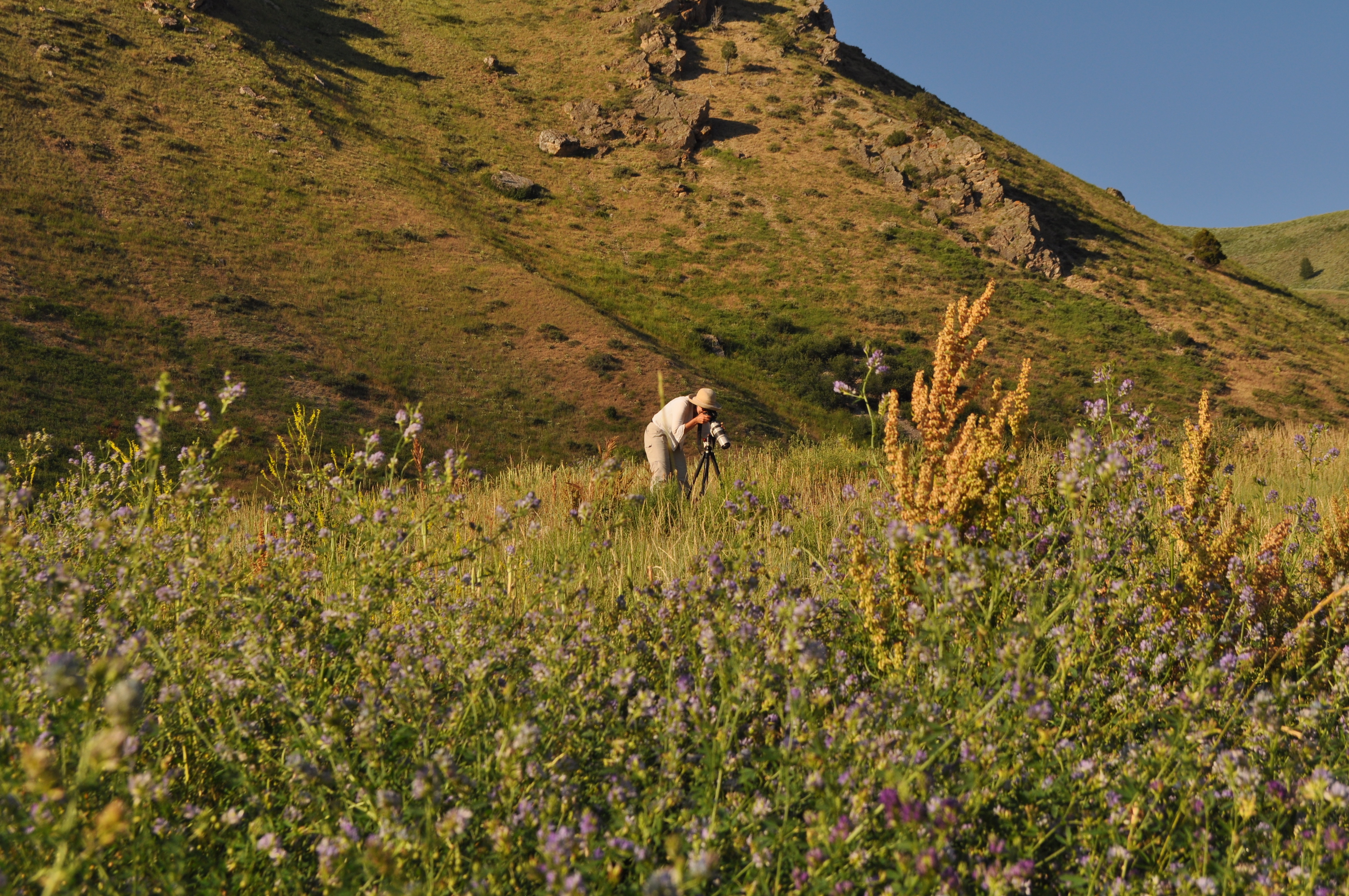 Preliminary results suggest that the mounds help protect the eggs from parasitism, fluctuating temperatures and desiccation in the extreme conditions. Raboin has been studying the spiders in their habitat as well as in the lab. Kariko joined her in the field to study how the mounds are made by recording behavior and examining their mounds. After seven years in the field, Raboin had never seen a male nor mating behavior. Last summer Kariko observed and recorded what to our knowledge is the first ever observed mating of this species in the field! Photo by Maggie Raboin

Kariko takes an interconnected approach in exploring the complex, intertwined environmental issues facing us today through projects that take inspiration form the natural world - especially spiders. This mason spider was recently highlighted in Spiders! Interconnectedness, Innovation, and Stewardship, an exhibition showcasing the beauty and wonder of spiders in an exhibit in Grand Teton National Park. Spiders! was created in celebration of the centennial of the National Park Service and in honor of the late Professor Herb Levi of Harvard and his wife and research partner Lorna.

HGWISE is the Harvard Graduate Women in Science & Engineering. It "is a graduate student organization dedicated to the personal, academic, and professional development of women in natural sciences, social sciences, and engineering at Harvard University. HGWISE aims to enhance the graduate experience for women in science and engineering at Harvard by providing opportunities for networking, professional development, and mentoring, as well as developing a meaningful community for women scientists."