In keeping with the theme of Exploration, Encounter, and Exchange, these collections are related to matters of immigration, and may include diaries, correspondence, memoirs, and organizational records. Through immigration, people encounter one another and exchange objects, ideas, and culture. 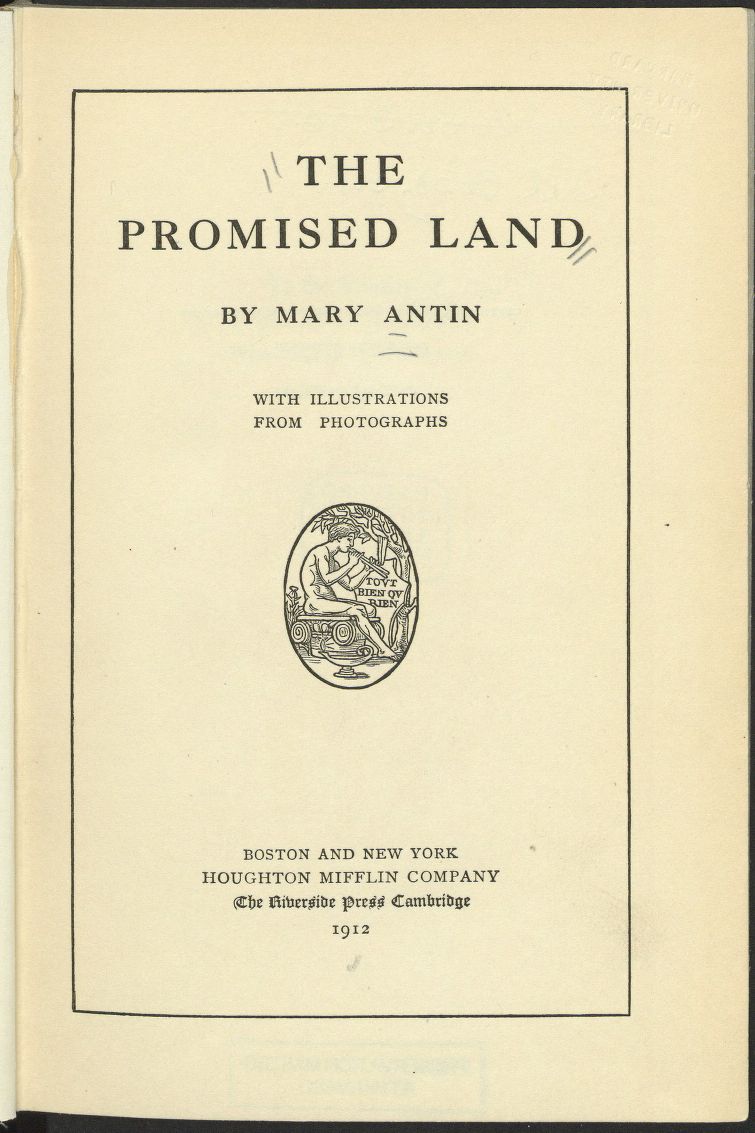 Mary Antin was an author and immigration rights activist. Born to a Jewish family in Polotsk in the Russian Pale of Settlement, she immigrated to the Boston area with her mother and siblings in 1894. Antin was heralded as a success story of what "free education and the European immigrant could make of each other." Her book The Promised Land is her autobiography, and describes her childhood transition from Russia to the United States.

Librarian and advocate Jane Maud Campbell was born in Liverpool, England. When she was twelve, the family moved to the United States. In 1902 she was made head of public libraries in Passaic, New Jersey, and became increasingly concerned with the plight of newly arrived immigrants. She also taught immigrants about naturalization and their prospects for employment. Collection consists of correspondence, speeches, and photographs of Campbell, and clippings about her work, libraries, and immigrants. Most of her speeches are concerned with the use of library resources in new and creative ways to meet the needs of immigrants, with libraries and librarians in an intermediary and interpretive role.

Author, lecturer, business consultant, and citizen-diplomat, Anna Chen Chennault (née Chen Hsiengmei) was born in Beijing, China, on June 23, 1923, and immigrated to the United States after her marriage to General Claire Lee Chennault in 1947. Her papers document her years as a vice president of the Flying Tiger Line, president of TAC International, consultant to various aviation companies and other businesses, as author, and active member of the Republican Party. The bulk of the collection consists of personal and professional correspondence, writings and speeches, business and organizational records, clippings and articles, and daily calendars (kept by her assistants) from 1957 to 1989. Also included are files pertaining to Chennault's work with the Republican Party and numerous Chinese-American organizations, correspondence with General Claire Chennault, and materials related to the General's life and career. Of note are diaries that cover the years she and the General first moved to the United States, and his untimely death, and her correspondence, much of it with influential people.

Founded in 1892 in Boston's South End by a small group of college-educated women, Denison House was a settlement house that offered camps, clubs, sports for girls and boys, classes, a library and clinic, union organization, and other services for the neighborhood's mixed nationalities. In 1942 the House was moved to the Dorchester-Roxbury area and in 1965 it merged with three other settlements to form Federated Dorchester Neighborhood Houses. Minutes, annual reports, day books, photos, scrapbooks, clippings, pamphlets, posters, and invitations comprise the collection.

The Fishermen's Wives of Gloucester (Association), known familiarly as the Gloucester Fishermen's Wives Association (GFWA) is a non-profit organization promoting the New England fishing industry, helping to preserve the Atlantic Ocean as a food supply for the world, and assisting active and retired fishermen and their families to live better lives. Initially called the United Fishermen's Wives Organization of Gloucester, the group formed in 1969; by 1977 it had changed its name to GFWA. Referring to themselves informally as "the Wives," the group of primarily Sicilian-American women, many first-generation immigrants, successfully learned English and assimilated to American culture. With their husbands offshore on fishing trips, often for extended periods of time, the Wives assumed responsibilities that had been traditionally divided according to gender. For instance, they managed households and acted as caregivers while at the same time paid bills, administered finances, and became involved in local political affairs. Digitized material includes audio of an oral history project conducted in 1994 and 2001.

For additional material from this collection, please see the Fishermen's Wives of Gloucester finding aid. Material available online will be indicated in blue.

From 1965 to 1973, Sonia Fuentes worked at the Equal Employment Opportunity Commission (EEOC) as the first woman attorney in the Office of the General Counsel, and later became the chief of the Legislative Counsel Division of the General Counsel's Office. Her responsibilities included enforcing Title VII of the Civil Rights Act of 1964, which prohibits discrimination in employment based on race, color, religion, sex, and national origin. In October 1966, she attended the organizing conference for the National Organization for Women (NOW). She also helped found other feminist organizations, such as the Women's Equity Action League (WEAL) and Federally Employed Women (FEW).

Author, historian, educator (New School for Social Research, A.B., 1963, Columbia University, A.M., 1965, Ph.D., 1966) Lerner was born in Vienna, Austria and came to the United States in 1939. She was president of the Organization of American Historians, 1981-1982, and was one of the earliest proponents of women's history as a field of study. Collection includes biographical information; correspondence with colleagues; lectures; writings, including reviews, articles, and drafts of books; her archived website includes interviews.

Founded in 1879 to provide a means of self-help for the poor, the North End Industrial Home first established a sewing room managed and staffed mainly by women for women. In 1885 the school was incorporated under its present name to serve the surrounding immigrant community, which after 1900 was mainly Italian. It aimed to help the immigrants become citizens and improve their economic conditions. In addition to the sewing room, the School offered other vocational courses for children and adults.