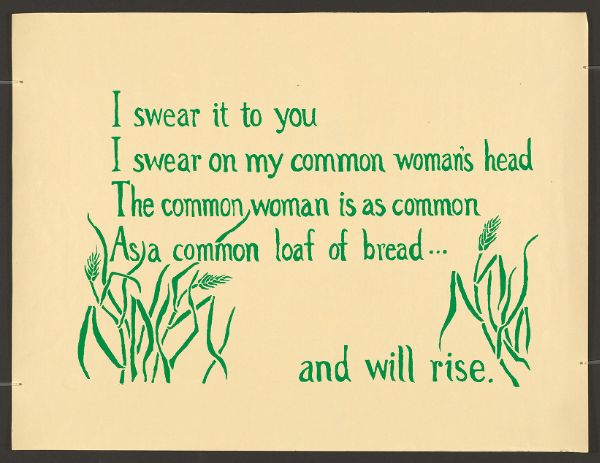 In keeping with the theme of Exploration, Encounter, and Exchange, these collections are related women's suffrage, and may include correspondence, memoirs, publications, and organizational records.

Best known for her lifelong crusade for woman's suffrage, Anthony was first active in the temperance and anti-slavery movements. In May 1869 she organized the National Woman Suffrage Association, with Elizabeth Cady Stanton as president. From 1891 to 1900, she was the second president of the National American Woman Suffrage Association. This collection contains genealogies, diaries, correspondence, financial records, pamphlets, clippings, speeches, photographs, and memorabilia.

For additional materials from this collection, please see the Susan B. Anthony collection finding aid. Materials accessible online will be indicated in blue.

The most prominent members of the Blackwell family were Elizabeth (1821-1910) and Emily (1826-1910), among the earliest women doctors and founders of the New York Infirmary and College for Women; their brother Henry Browne Blackwell (1825-1909), his wife Lucy Stone (1818-1893), and their daughter Alice Stone Blackwell (1857-1950), known for their leading roles in the abolition, woman suffrage, and prohibition movements; and their sister-in-law Antoinette Louisa (Brown) Blackwell (1825-1921), wife of Samuel Charles Blackwell (1823-1901), the first woman ordained as a minister in the United States and an active speaker on behalf of abolition, women's rights and prohibition. Correspondence, diaries, memoirs, writings, photographs, biographical and genealogical information, and other papers of the Blackwell family comprise the collection.

Ellen Dwight Eaton was a first cousin once removed of Elizabeth Cady Stanton, suffragist and women's rights activist. Eaton was the daughter of Stanton's cousin, Amos Beale Eaton, and granddaughter of Stanton's aunt, Sally Cady Eaton. This collection consists of letters written between 1857 and 1868, nearly all to Eaton, most from Stanton. A few mention the founding of the suffrage periodical, The Revolution, while others concern Stanton's travels and activities for suffrage. Other notable correspondents include Susan B. Anthony and Dr. Elizabeth Blackwell. The collection includes 20 complete letters, a fragment, a picture postcard of Susan B. Anthony's home, and descriptive notes by Elizabeth Selden Rogers. 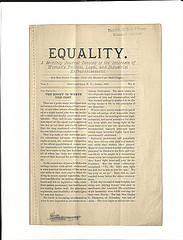 A monthly journal devoted to the industrial, legal and political interests of women. 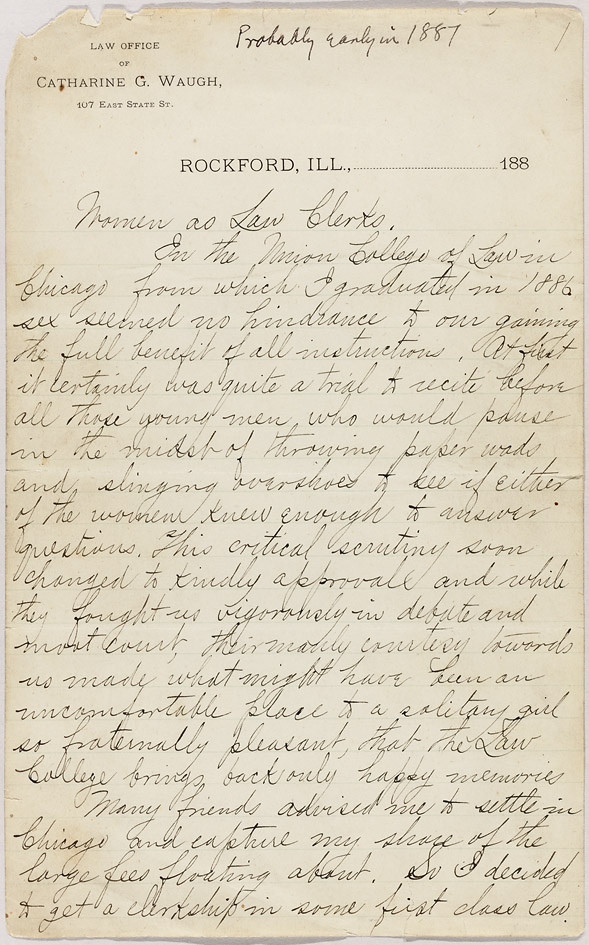 Suffragist and lawyer, Catharine Gouger Waugh McCulloch was active in the movement for women's rights, seeking state legislation permitting woman suffrage in presidential and local elections not constitutionally limited to male voters, a bill that passed in 1913. She was also instrumental in the passage of Illinois legislation granting women equal rights in the guardianship of their children (1901), and raising the legal age of consent for women from fourteen to sixteen (1905). She served as legal adviser (1904-ca.1911) and as first vice-president (1910-1911) of the National American Woman Suffrage Association. Part of the Mary Earhart Dillon Collection.

Feminist, suffragist, and lawyer (Vassar, B.A., 1909; New York University, LL.B., 1912), Milholland specialized in criminal and divorce practice and was active in the women's suffrage and peace movements, and the effort to abolish capital punishment. She supported the garment workers strike of 1916, and proclaiming herself a socialist, joined the Women's Trade Union League, the National Association for the Advancement of Colored People, and the Fabian Society of England. 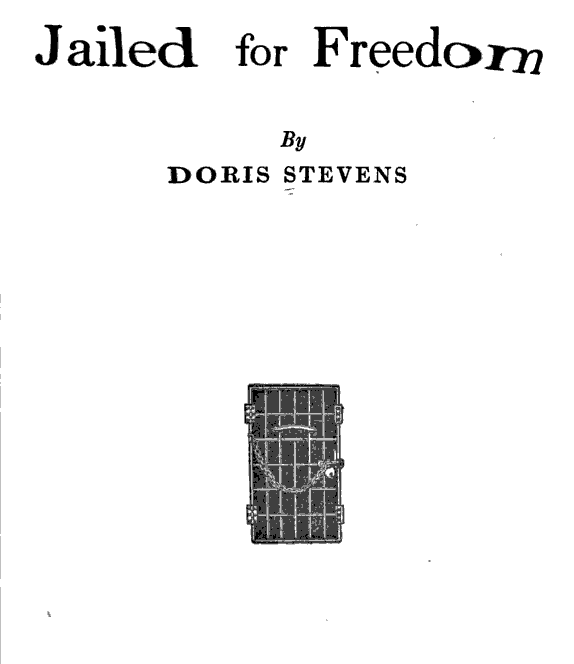 Written by Doris Stevens, this 1920 book describes the imprisonment of women activists in 1917 during the National Woman's Party's radical campaign for suffrage. The full text of the book is available online.

Mother Goose as a Suffragette 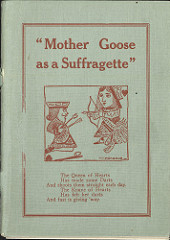 A booklet of suffrage-themed poems, created by the Woman Suffrage Party of New York City in 1912. 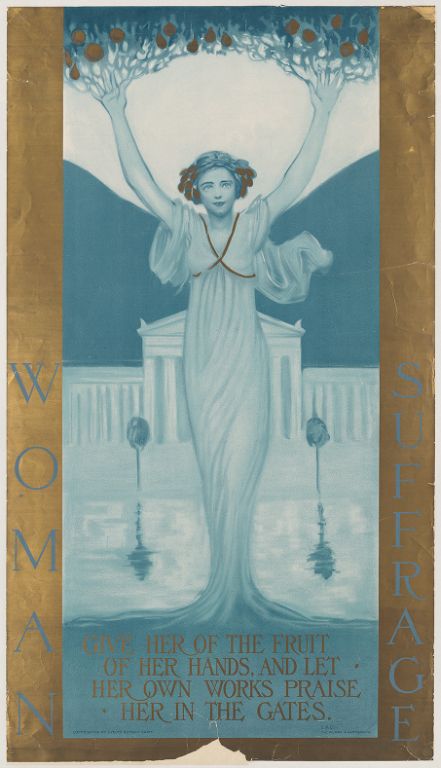 For additional materials from this collection, please see the Edna Lamprey Stantial Papers finding aid. Materials accessible online will be indicated in blue. 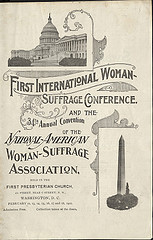 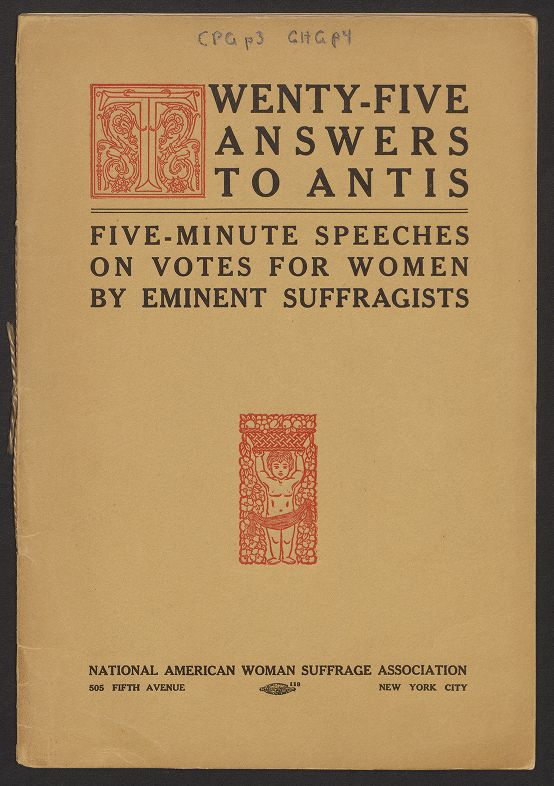 A pamphlet on suffragism from the Charlotte Perkins Gilman collection. 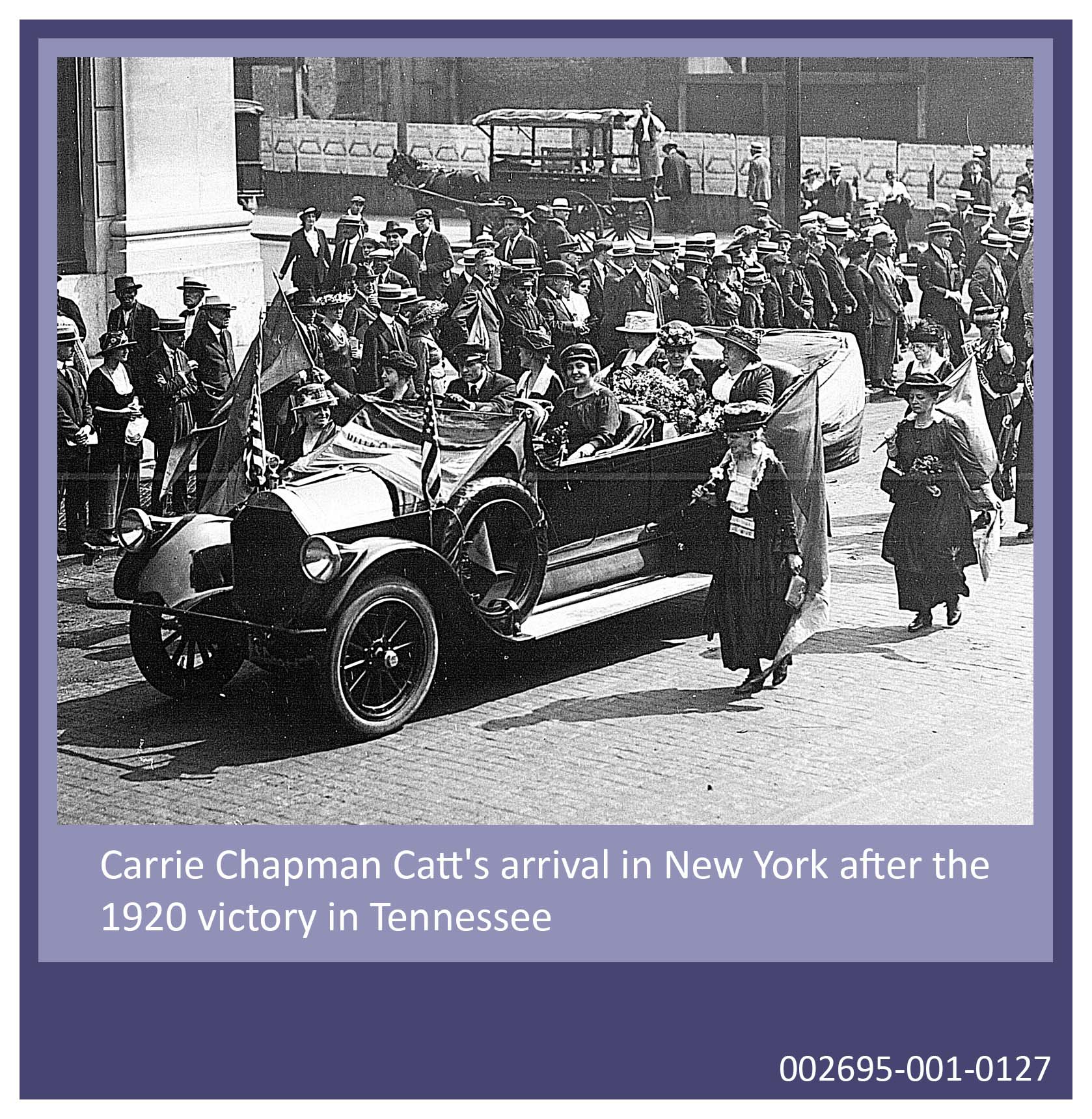 This module consists of three distinct series of collections from the Schlesinger Library: suffrage and voting rights, women in national politics, and reproductive rights. Note that a subscription to ProQuest, which you can typically find at college and academic libraries, is required to access this material. 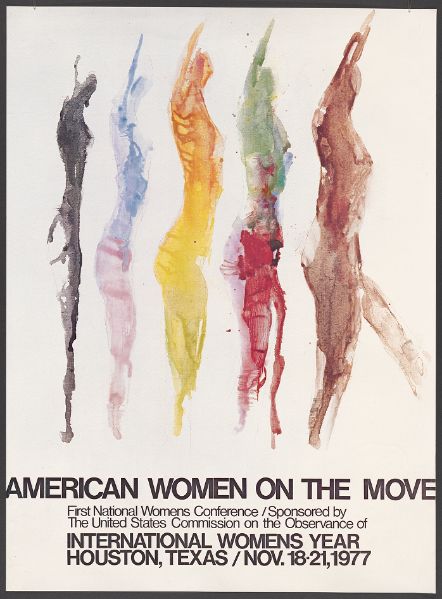 Audio of the National Women's Conference

Reel 6 has audio of resolutions: #23 Sexual Preference and #26 Women's Department, are discussed and collectively voted upon. Addie Wyatt gives an inspirational speech; Charlotte Bunch and Margaret (Midge) Costanza advocate for gay and women's rights; and Brenda Parker, a seventeen year-old delegate, discusses the future of the women's rights movement.

African American activist Pauli Murray was a university professor and administrator in the United States and in Ghana, served on a study committee for the President's Commission on the Status of Women, and earned a J.D.S. from Yale Law School. A writer, she published a book of poetry, Dark Testament and Other Poems (1970), and four other books: States' Laws on Race and Color (1951), Proud Shoes: The Story of an American Family (1956), The Government and Constitution of Ghana (1961), and an autobiography, Song in a Weary Throat, published posthumously in 1987. She also wrote numerous newspaper and journal articles. In the early 1970s, she was the first African American woman to be ordained an Episcopal priest. Digitized materials include speeches, writings, and audio.

For additional material from this collection, please see the Pauli Murray collection finding aid. Material available online will be indicated in blue.

Bernice Resnick Sandler worked to ensure equal access to educational employment for women. Under the auspices of the Women's Equity Action League (WEAL)'s Committee for Federal Contract Compliance, she filed administrative complaints against over 250 colleges and universities under the U.S. Department of Labor, and helped inspire the leigslation which eventually became Title IX of the Education Amendments of 1972. Sandler was director of the Project on the Status and Education of Women (PSEW) of the Association of American Colleges from 1971 to 1991. She has worked with the Center for Women Policy Studies, the National Association for Women in Education, and the Women's Research and Education Institute. She pioneered research into campus sexual harassment, gang rape, and a "chilly climate" for women on campus. She was an active member of the Women's Equity Action League and the Weal Fund in the 1970s, and from 1975 to 1982 was a member of the National Advisory Council on Women's Educational Programs. Sandler has served on the boards of numerous organizations, mainly in areas of higher education, women's education, women's rights, women's health, Jewish issues, and international women's rights. Website is archived.

Collection consists of 26 audiotaped interviews with state legislators and groups of supporters and opponents of the Equal Rights Amendment in Texas, Illinois, and Georgia.

For additional material from this collection, please see the Politics of the Equal Rights Amendment Audiotape Collection finding aid. Material available online will be indicated in blue.

The Proposed Equal Rights Amendment to the United States Constitution; a memorandum.

"This paper was presented to the Council by its study group on equal legal rights: Sarah Jane Cunningham [and others]" Includes bibliographical references. 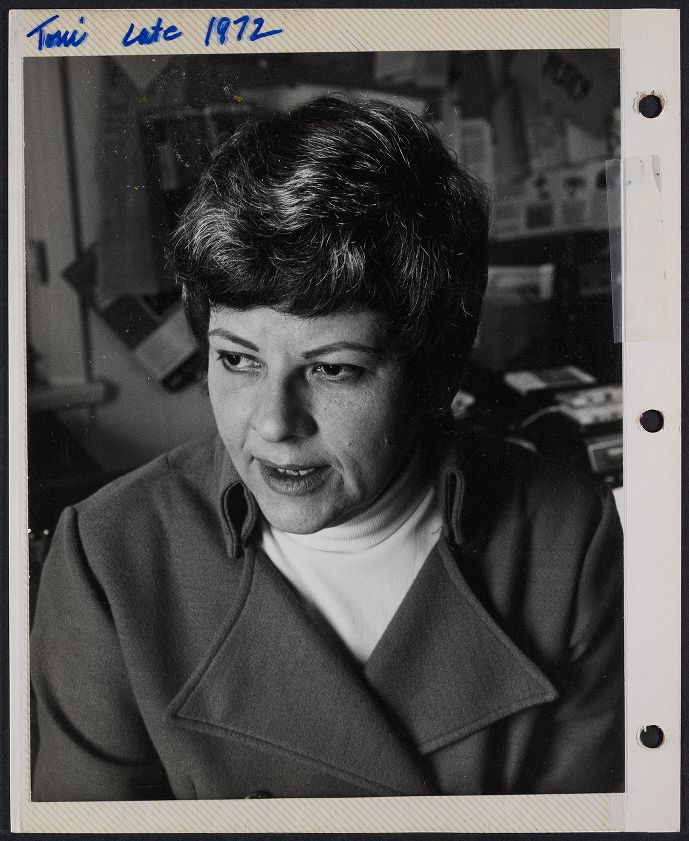 Feminist and long-time activist with the National Organization for Women (NOW) and the Feminist Majority Foundation, Virginia A. "Toni" Carabillo joined NOW in 1966 and one year later helped found the California chapters. She served as president of the Los Angeles Chapter of NOW (1968-1970, 1980-1982), was a member of NOW’s national Board of Directors (1968-1977), served as a national Vice President (1971-1974), and chaired NOW’s National Advisory Committee (1975-1977). She was also the director (ca.1980) of the NOW Equal Rights Amendment Countdown office in Los Angeles during the final ratification drive. Judith Kay Meuli served the Los Angeles chapter of NOW and the national organization in a number of capacities. Meuli and Carabillo's Los Angeles home was a gathering place for women's rights advocates and a center for feminist activities. Digitized material includes photographs, biographical information, and a website.

For additional materials from this collection, please see the Toni Carabillo and Judith Meuli Papers finding aid. Material available online will be indicated in blue.

Report to the Colorado General Assembly: Committee on the Equal Rights Amendments

A report on the potential Equal Rights Amendment.

Florynce Rae ("Flo") Kennedy was an African American lawyer, feminist, activist, and civil rights advocate. Dubbed by the 1970s popular press as "radicalism's rudest mouth," she cultivated a reputation for her distinct personal style and colorful language as a social critic. Her television show has been digitized.

June Jordan was an award-winning author, poet, and social and political activist. Her writings address themes of discrimination, equality, economic and social disparities caused by race and gender, global poverty, religious intolerance, and American foreign policy. An outspoken bisexual, Jordan increasingly championed the rights of lesbians, gays, and bisexuals. Over the course of her career she received many honors, including the Yaddo Fellowship (1979), NEA grant in Creative Writing (1982), National Association of Black Journalists Achievement Award (1984), and the PEN American Center's Freedom to Write Award (1991). Digitized audio material includes interviews.

For additional materials from this collection, please see the Audio Collection of June Jordan finding aid. Materials available online will be indicated in blue.

The National Organization for Women was organized in 1966 to work toward the realization of legal, economic, and social equality for women. The Boston chapter was founded in 1969. Until 1974 it was known as the Eastern Massachusetts Chapter and included five units: North Shore, South Shore, Concord, Framingham, and Marlboro. The records include by-laws; minutes and other papers concerning board and general meetings; correspondence; records of committees and task forces; subject files; press releases and clippings; financial records; memorabilia; photographs, color slides; and audiotapes of "Now We're Talking," a weekly radio show, 1974-1980. Digitized material includes audiotapes and the organization's web site.

For additional material from this collection, please see the Boston N.O.W.  finding aid. Material available online will be indicated in blue.