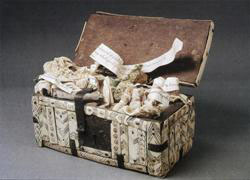 Collection of Middle English texts assembled by University of Michigan faculty and from texts provided by the Oxford Text Archive and works created specifically for this Corpus by the Humanities Text Initiative.

The Dictionary of Old English Corpus
A searchable collection of 3037 texts, representing a complete record of surviving Old English except for some variant manuscripts of individual texts. Covers Great Britain in Old English and Latin.

e-rara: Schweizer Drucke des 16. Jahrhunderts
Multiple Swiss libraries have joined in an ongoing project to digitize important 16th century religious texts with an emphasis on the Reformation. Texts may be searched and downloaded as PDFs. In German.

In Parentheses
Index to PDFs of medieval texts, translations, and commentaries from a wide variety of disciplines. Created and maintained by York University.

eMGH2: Monumenta Germaniae Historica
The eMGH-2 contains a selection of more than 400 works from different series and also offers a majority of the texts that have been edited in the subseries, Auctores Antiquissimi and Scriptores rerum Merovingicarum.

Narrative Sources From the Medieval Low Countries
This database is intended to give an exhaustive and critical survey of all the narrative sources originating from the medieval Low Countries including annals, chronicles, letters, diaries, poems, saint's lives, and genealogies.

The Online Medieval and Classical Library
Index to full-text sources searchable by author, title, genre, and language. Created and maintained by independant scholars.

Patrologia Latina
An electronic version of the first edition of Jacques-Paul Migne's Patrologiae Cursus Completus, published between 1844 and 1855, and divided into two parts, the Series Latina and the Series Graeco-Latina.

Sermones.net
Project to create an searchable electronic edition of the corpus of Latin sermons. The first group of works completed is more than 100 sermons of Jacobus da Voragine. This website comprises a portal with many links to associated historical material, bibliographies, electronic journals, discussion groups, and announcements.

Vetus Latina
The body of Latin biblical texts which were in existence and use from the second century AD/CE until the Vulgate became predominant. Searchable by book, verse, and author.