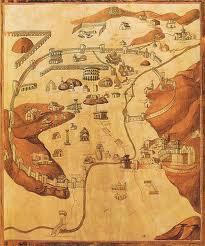 biab: The British & Irish Archaeological Bibliography
Available by subscription from the Council for British Archaeology. Contains datasets covering publications from 1695 to the present day on archaeology and the historic environment, historic buildings, maritime and industrial archaeology, environmental history, and the conservation of material culture with a geographical focus on Britain and Ireland.

historicum.net
Extensive portal for all aspects of historical studies. Maintains many klinks to online journals, discussion, lists, publications, and events. In German.

Latin Place Names File
Index to authorized Latin place names sponsored and maintained by the Rare Books and Manuscripts Division of the Association of College and Research Libraries.

Mapping Gothic France
Database of images, texts, charts, and historical maps aims to create an environment in which parallel stories of Gothic architecture and the formation of France in the 12th and 13th centuries may be explored and considered in the three dimensions of space, time, and narrative.

Names of Printing Towns
This index provides English or other vernacular forms for the Latin names of printing towns as found in early printed books. Created and maintained by the British Library and the Bibliographical Society.

Regesta Imperii
Inventory of all charters and historiographic sources of Roman-German kings from the Carolingians to Maximilian I. and of the Popes of the early and high Middle Ages. Searchable by subject thesaurus, keyword, personal name and journal/publication title. Includes an extensive bibliography of literature on European medieval history. In german and English.

Repertorium Chronicarum: A Bibliography of the Manuscripts of Medieval Latin Chronicles
This resource attempts to record in a single reference work the location of every known manuscript of every known Latin chronicle of the Middle Ages. Included are all Latin narratives of public (national, civic, political, military, corporate, ecclesiastical) events: chronicles, annals, histories, chronologies, notes on events; and the implied narratives of such events: catalogues of popes, emperors, and kings, and genealogies of emperors and kings. Searchable by keyword and browsable by title.