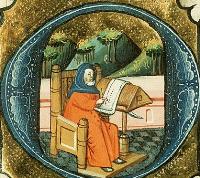 The Alchemy Website: Database of Alchemical Manuscripts
Database aims to include descriptions of all alchemical manuscripts in U.S. and European collections. Extensive bibliography and images.

Antike und mittelalterliche Handschriften in der Schweiz
Active project to provide access to cataloging, commentary, and digital images for all manuscripts in Swiss collections. In German and French.

Biblioteca Apostolica Vaticana = Vatican Library
Website of the Vatican Library. Contains links to the Archivio Segreto Vaticano and other resources including the map, Forma Urbis Romae. Best used with Internet Explorer 5.x or above.

Blockbooks in Bavaria
Approximately 90 blockbooks known in Bavarian collections have been digitized, cataloged, and made accessible through the Bayerische Landesbibliothek Online. Infrared images of watermarks are included.  In German.

British Library Digital Catalogue of Illuminated Manuscripts
This searchable catalog contains descriptive records for manuscripts drawn from all the regions and periods represented in the British Library collections.

The Cary Collection
Fifty-one manuscript leaves from Western European 12th-16th century manuscripts from the collections of the Rochester Institute of Technology.

CEEC: Codices Electronici Ecclesiae Coloniensis
Multiple function website with hundreds of high resolution digital manuscripts from the Episcopal and Cathedral Library in Cologne. Some static pages, i.e. Project Description, are available in English. Includes a link to a useful tool in English, The Medieval Manuscript Manual.

Centre for the Study of Fifteenth Century Painting in the Southern Netherlands
Includes a list of approx. 1,700 paintings of 'Flemish Primitives' with artist, title, and subject information. The list is based on Hélène Mund's Early Netherlandish Painting (1400-1500) and is updated frequently. Also contains the Rogier van der Weyden Bibliography since 1984 with multiple images of his works.

Closer to Van Eyck: Rediscovering the Ghent Altarpiece
Closer to Van Eyck: Rediscovering the Ghent Altarpiece presents the results from Lasting Support, an interdisciplinary research project to assess the structural condition of the Ghent Altarpiece. This project ran from April 2010 through June 2011, and consisted of three main segments: an urgent conservation treatment, an assessment of the current condition of the altarpiece, and a campaign of technical documentation. This website contains extensive conservation documentation as well as a viewing and comparison tool for images from the altarpiece produced through macrophotography.

Codex Gigas
The Codex Gigas or the Devil’s Bible is a medieval manuscript at the National Library in Sweden. It is reputed to be the largest surviving European manuscript. It also contains a large, full page portrait of the Devil. This site contains a digitized version of every page of the manuscript as well as commentaries on its history, texts, script, initials and decoration.

CORSAIR: The Online Research Resource of the Pierpont Morgan Library
Digital images from the Morgan Library’s collection of Medieval and Renaissance manuscripts. Covers ten centuries of Western illumination and contains manuscripts from all major schools.

Decentral Digital Incunabula Collection (vdIB)
This project, funded by the DFG (German Research Foundation) was carried out in co-operation with the University of Cologne, the Stadt- und Universitätsbibliothek Cologne, and the Herzog August Bibliothek. Over 1,000 incunabula between the years 1450-1484 have been fully digitized.

Digital Medieval Manuscripts at Houghton Library
The Houghton Library’s collection of medieval and Renaissance manuscripts represents a significant resource for the study of the Middle Ages and the Renaissance in Western Europe. This Web site provides strategies for searching Houghton's medieval manuscripts as well as links to bibliographies related to these materials compiled by the Library.

Digital Scriptorium
The Digital Scriptorium was conceived as an image database of dated and datable medieval and renaissance manuscripts with the intent to unite scattered resources into an international tool for teaching and scholarly research. Catalog entries include images and bibliography. Searchable by multiple indexes.

e-codices: Virtuelle Handschriftenbibliothek der Schweiz
Collection of digital ms. from 11 Swiss libraries. May be browsed by author/title/age/signature or searched by keywords. English interface.

Early Manuscripts at Oxford University
This website provides access to over 80 early manuscripts in high resolution digital images. These manuscripts are held in 7 institutions associated with the University of Oxford. Access is through browsing full pages or thumbnails.

Enluminures
A joint production of CNRS and Direction du Livre et Lecture, this searchable database includes more than 14,000 images from over 1200 illuminated manuscripts. In French.

Europeana Regia
The Europeana Regia project (2010) will digitise 874 rare and precious manuscripts from the Middle Ages and the Renaissance with the collaboration of five major libraries located in four countries. This 30 month project and will draw together three collections of royal manuscripts that are currently dispersed and which represent European cultural activity at 3 distince periods: the Biblioteca Carolina (8th-9th c.), the Library of Charles V (14th c.), and the Library of the Aragonese Kings of Naples (15th-16th c.).These manuscripts will be fully accessible through this portal and on the websites of the partner libraries and Europeana.

Hill Museum and Manuscript Library
Use VIVARIUM to search for digitized manuscripts, art, rare books, photographs, audio, video, and other resources among the more than 90,000 manuscripts in the Hill Museum and Library. Use the “Catalogue Search” option to search the entire collection.

A Hypertext Book of Hours
An introduction to the structure of a book of hours based on several sources. Includes explanatory materials, Latin/English facing pages texts, and numerous links to other books of resources.

Late Medieval and Renaissance Manuscripts on the Web
Finding aid to digital images from various manuscripts compiled by the CHD: Center for Håndskriftstudier i Danmark/Institute for the Study of Illuminated Manuscripts in Denmark.

Mandragore
Database of manuscripts in the Bibliotheque Nationale with extensive images. Searchable by keyword.

Manuscript Libraries in Austria
Comprehensive list of MS in Austrian collections linked to extensive bibliography. May be searched by institution or MS name/shelfmark. Also contains links to MS Web sites and digital projects.

Manuscripta Medievalia
A feature of this site is that digital images of all printed mss. catalogues of German collections are searchable by incipit. Also contains high quality digital images of nearly 100 manuscripts, multiple indexes to iconography and manuscript literature. Supports searching by manuscript identifiers or thematically.

Medieval Imagainations: Literature and Visual Culture in the Middle Ages
Searchable database of images illustrating connections between the literature and visual culture of medieval England. Images have been selected to correspond to the main episodes dramatized in the English Mystery Plays. Images may be search by thematic content, keywords, titles, place, and date. Based on a project designed at the University of Cambridge.

This database contains descriptions of all medieval western manuscripts written in Latin script and produced up to c. 1550 now preserved in public and semi-public collections in the Netherlands. These include the collections of libraries, museums and archives, as well as the collections of monastic orders and some other private institutions that are open to researchers.

A Medieval Mirror: Speculum humanae salvationis, 1324-1500
Full-text version of Adrian Wilson's 1984 study of the many versions of the Speculum humanæ salvationis. Includes all illustrations, bibliography, and index.

Paleography - Virtual Library (VL)
This extensive collection of Paleography resources is part of the larger Virtual Library History Project project in 2000 by a group of German scholars Georg Vogeler, Patrick Sahle, Horst Enzensberger and Thomas Frenz. The portal and various sections have been translated to English.

Parker Library on the Web
A prototype interactive workspace designed to support use and study of the manuscripts in the Parker Library at Corpus Christi College, Cambridge, England. Known as the Parker-on-the-Web Digitisation Project it has been jointly developed by the College and Stanford University and is supported financially by the Andrew W. Mellon foundation.

Prato Haggadah
Digital images of an unfinished 14th century Spanish manuscript with "page turner" features. There are pproximately 85 leaves of which 30 are fully illuminated and 58 are partially illuminated.

St. Gall Manuscripts & Reichenau Manucripts
A new addition to the St. Gall Plan's website is a project to digitize manuscripts from across Europe and North America known to have been in the monasteries of Reichenau and St. Gall in the ninth century. The manuscripts are intended to be a virtual presentation of the two monasteries’ libraries and give us a window into the intellectual context that inspired the creation of the Plan. There are curerntly 77 manuscripts available. Additional manuscripts, metadata and site features (such as a comprehensive search function) will be added over the course of 2011 and 2012.

Schoenberg Database of Manuscripts
Database containing more than 60,000 entries for manuscripts written before 1600 and consisting of five or more leaves. It includes bibliographic information from approximately 4,000 catalogues from 400 dealers and auction houses since the early 19th century. This data is supplemented by entries from inventories and catalogues of private and institutional libraries.

Supertextus notarum tironianarum
Part of a suite of ms. tools and resources, the "Tironian Notes" represents an important contribution to the verification and deceiphering of early medieval "shorthand." Compiled by Martin Hellmann. In German.

Utrecht Psalter
Digital version of the Carolingian period Utrecht Psalter, produced around 820-840 in the Benedictine abbey of Hautvillers near Epernay. Viewable only with Internet Explorer.

Virtual Library: History: Paleography
Subsection of the WWW Virtual Library for History devoted to paleography. Contains links to information about conferences and publications as well as analytical tools.

Virtual Library: History: Codicology
Subsection of the WWW Virtual Library for History devoted to codicology. Contains links to information about conferences and publications as well as analytical tools.

Watermarks in Incunabula Printed in the Low Countries
Searchable database of watermark descriptions and images. Created and maintained by the Royal Library, Netherlands.