The guide lists major archival resources for the study of Soviet history available at Harvard university library and archives.

Harvard's Trotsky archive is undergoing digitization. Below please see information about each part of the archive, with inks to the online finding aids. The digitized images can be accessed via online finding aids, under the DIGITAL MATERIAL tab: 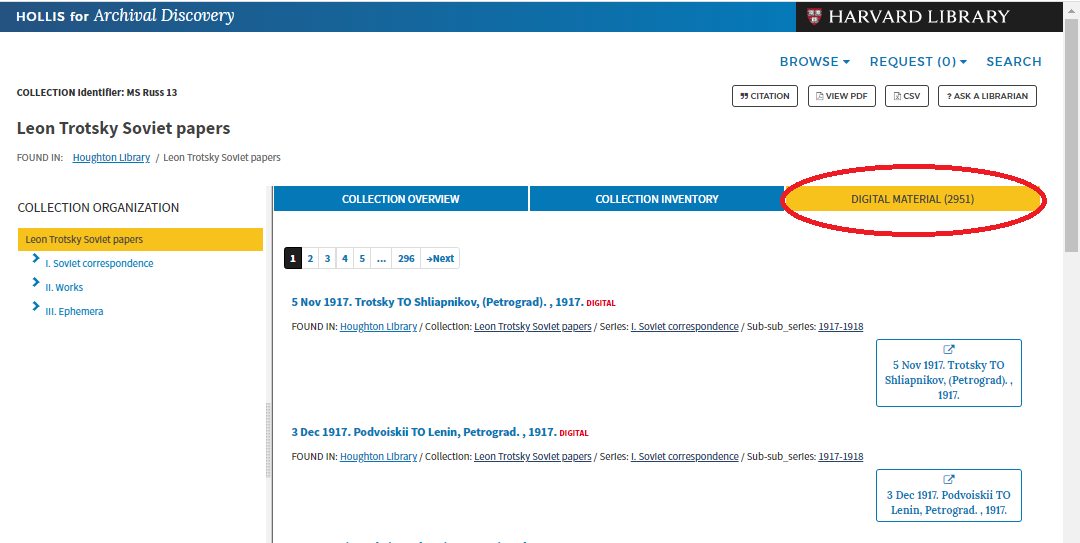 Soviet Union correspondence, 1917-1929, consists of original letters and some copies and transcripts written by Leon Trotsky (a Russian revolutionary and Soviet leader) and other Soviet officials, with copies of telegrams exchanged between Trotsky and Vladimir Lenin from 1917 to 1921. Writings of Trotsky from the Soviet period include manuscripts, typed excerpts and clippings, pronouncements, and unpublished statements in addition to documents written during the Left Opposition's fight against Joseph Stalin from 1923 to 1927.

Exile papers, 1929-1940, contain correspondence, compositions, a small amount of Dewey Commission (Commission of inquiry into the charges made against Leon Trotsky in the Moscow trials) exhibit papers, and related ephemera.

These papers were isolated from the main body of Trotsky's papers in Europe during the war, saved by his secretary John Van Heijenoort and added to the collection in 1958. They consist mainly of works of the Exile period.

Typescripts of the first draft and final manuscript of Charles Malamuth's English edition and translation of Trotsky's Stalin, including notes and other material not used in the final edition. "Stalin, an appraisal of the man and his influence" was published by Harper & Brothers (London) in 1941.

Unpublished exhibits of the Mexico, New York, and Paris hearings of the John Dewey Commission of Inquiry into charges made against Leon Trotsky in the Moscow trials, completed in New York on 21 Sept. 1937.

From the holdings of the Russian State Military Archive Moscow, Russia.Accompanied by printed guide which replicates the contents of reel 1 and serves as a finding aid to the collection.