The following research was conducted by Heather Mumford, Archivist for the Harvard T.H. Chan School of Public Health, and was originally available through a now retired blog hosted by the Center for the History of Medicine. If you have additional questions, or to continue the conversation about women in public health, please email the archivist.

Lost and Found: the First Woman with a Harvard Credential 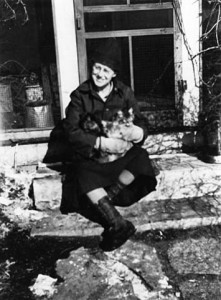 Linda James, circa 1935. Courtesy of the Minnesota Historical Society.

It is widely recognized that the Graduate School of Education, established in 1920, was the first Harvard graduate school to enroll women. Those initial graduates in 1921, more than thirty women earning Ed.M. degrees, are considered the first female Harvard University graduates. There were, of course, female graduates of Radcliffe College beginning in the 1890s, however they were registered at Radcliffe, not Harvard.

As the Harvard School for Public Health prepares to celebrate its 100th anniversary, interesting facts in public health history are coming to light. With regard to the enrollment of women, HSPH was a pioneer. In a November 1913 Administrative Board meeting, members voted to admit and credential women with a Certificate in Public Health (C.P.H.) at the Harvard-M.I.T. School for Health Officers (now known as the Harvard School of Public Health). Although this was a certificate program as opposed to a degree program, it was in fact the first program to admit and credential women on the same basis as men.

So who was Harvard’s first credentialed woman? In 1917, Linda Frances James was the first woman to graduate from the School for Health Officers. To learn more about her, we consulted a variety of sources including the Harvard University Archives, the 1917/18 HSPH catalog, the Minnesota Historical Society, and a definitive history, Founders: Harvard School of Public Health, wherein author Jean Alonzo Curran also acknowledges James as the “first woman student.”

From these sources we have learned that James was born in 1891 in Minnesota. She earned her bachelor’s degree from the University of Minnesota in 1914, and took a position as a science teacher at Monticello High School from 1914-1915 before enrolling in 1915 as a student at the Harvard-M.I.T. School for Health Officers.

While enrolled at the School for Health Officers, James also worked as a Medical Social Worker at Massachusetts General Hospital from 1916-17. She completed her C.P.H. in January 1917, and shortly after took a position as the Director of After-Care Division at the Harvard Infantile Paralysis Commission …after which point, her story becomes a bit cloudy.

Dr. Eleanor Dewey Mason was born in Tura, Assam, India in 1898 to American Baptist missionary parents. After graduating from Newton High School, she earned her BA from Mt. Holyoke College (1919) and an MA from Wellesley College (1921). Her early interest was in zoology as well as missionary work, and after spending a year as a research assistant in genetics with the Carnegie Institute in New York City, she took advantage of an opportunity to become a zoology lecturer in India at Madras University.

It is important to note that at this particular time, women took courses but could not receive degrees from HSPH or HMS. While the Harvard-MIT School for Health Officers (1913-1921) credentialed women on the same basis as men (with certificates in public health), this practice ended in 1921 with the withdrawal of MIT and an establishment of a Harvard degree-granting school of public health. Therefore, it isn’t surprising to see Dr. Mason listed in the 1927 HSPH course catalog as a vital statistics student, even though she is not considered a graduate of the program.

The time Dr. Mason spent at Harvard was seminal to her professional career. Her early interest in studying systemic zoology expanded to an interest in human physiology or, more specifically, how race and climate influenced metabolism. Dr. Mason also met Dr. F.G. Benedict, Director of the Carnegie Nutrition Laboratory, while studying at Harvard. Dr. Benedict had recently become interested in the possibility of racial differences in metabolism, and his lab provided Dr. Mason with financing and equipment for her research project. With this backing secured, Dr. Mason returned to Madras to resume teaching at the Women’s Christian College and complete her thesis–the first to establish basal metabolic norms for Indian women. This research was exceptional for its time, as Dr. Mason focused on non-traditional subjects. Two copies of Dr. Mason’s 1934 thesis, The metabolism of women in South India, with a note on the vital capacity of the lungs in South Indian women, are available at Harvard from the Center for the History of Medicine and the Harvard University Archives

In 1934 and 1940, Dr. Mason published on the basal metabolic rate of South Indian women in comparison to British and American women who travel from temperate to tropical climates. Her Western research subjects were colleagues who had also come to Madras to teach at the Women’s Christian College. Some of the women experienced a 10% drop in their metabolism as a result of the tropical climate, while others experienced no change at all. Dr. Mason’s results did show consistently that weight decreased and pulse rates fell in warmer climates, and that the basal metabolic rate of South Indian women was decidedly lower than that of British and American women.

In 1942, her research focused more on nutrition in rat models, with the intention of demonstrating the inadequacies of the rice diet common among the poor in South India. A 1945 paper examined the supplementary effects of casein, calcium lactate and butter, singularly or combined, on the growth of young rats. Casein and calcium lactate were found to have a highly significant effect in promoting growth, while butter affected both growth and general condition adversely. Casein, when added to butter, counteracted the negative effect of butter and converted it into a positive effect (Mason 1945). In a 1946 paper, she and her team experimented further with ragi (a cereal crop also known as Eleusine coracana, or “finger millet”) and found that, when substituted for rice, it had a marked stimulating effect on growth directly proportional to the amount given.

In addition to her physiological research in basal metabolism, and after years of teaching, in 1948 Dr. Mason became the third principal of the Women’s Christian College. In this role, she pioneered a home science courses for the students. In 1951, Mt. Holyoke College awarded her a honorary doctorate of science. In 1956, Dr. Mason retired from her role at Women’s Christian College and was invited by the University of Bombay to continue her research in the laboratory of Dr. A. Sreenivasan in the Department of Chemical Technology.

She moved into the Missionary Settlement for University Women, an interdenominational hostel comprised of fifty-eight British and Indian colleagues. Dr. Mason’s laboratory was modest: a room with two beds and measuring equipment, and connected to her own bedroom. Research subjects would be asked to fast for twelve hours. Once they arrived at the lab, they were instructed to lie quietly on one of the research beds and breathe into a spirometer for three eight-minute stretches while Dr. Mason and her assistant Mary Jacob, from Travancore, measured pulse, blood pressure, and temperature. After a day’s work, Dr. Mason would spend her evenings at the missionary leading prayers with the other hostel residents. She stayed in the settlement until 1964, then spent several years as a member of the ecumenical Farncombe Community in England before returning permanently to the United States in 1970.

It is clear from newspaper articles and from personal accounts that Dr. Mason returned to Boston to continue her involvement at the Harvard School of Public Health, likely as a researcher but also potentially as an educator. The Radcliffe Quarterly confirms that Dr. Mason was a visiting scientist at HSPH from 1963-1964. Contemporary faculty such as Joseph Brain and James Butler reflect fondly on their brief overlap with her at the school, including her involvement with physiology research and teaching, now considered part of the Department of Environmental Health.

In addition to her career at Harvard, Dr. Mason was a member of the tertiary Anglican Franciscan group, Christa Prema Seva Sangha, of the Society of the Companions of the Holy Cross. In later life, she served as a communicant and a parish receptionist for the Church of the Advent. She was also part of Windham House, the Graduate Training Center for Women of the Episcopal Church, which was a center for women studying theology and other disciplines.

Dr. Mason passed away in 1995 at the age of 97. Her body was donated to Harvard Medical School before being buried at Forest Hills Cemetery in Jamaica Plain.

Although the Center for the History of Medicine does not hold any unpublished records from Dr. Mason besides her thesis, records of her professional career can be found scattered across multiple repositories, including:

I wish to thank Jim Butler, Senior Lecturer on Physiology, for sharing stories and resources about Dr. Eleanor Mason, and for connecting me to the archives at the Society of the Companions of the Holy Cross, whose secondary source materials served as the backbone of this post. Dr. Mason was a colleague as well as a dear friend of his family, and without his persistence her story likely would have remained dormant in the archives. I also would like to thank Dr. Joe Brain, Cecil K. and Philip Drinker Professor of Environmental Physiology, and Yechaan (Eric) Joo, a graduate student at the Harvard Chan School, for their research on Dr. Mason’s publications and her connection to the Department of Environmental Health.

A complete list of Dr. Mason’s publications is available below. Her obituaries from the Boston Herald and Boston Globe (1995) can be accessed online here.

List of Mason's publications, compiled by Jim Butler, including number of citations in modern literature:

To request these materials, submit an inquiry to the Center for the History of Medicine reference team.